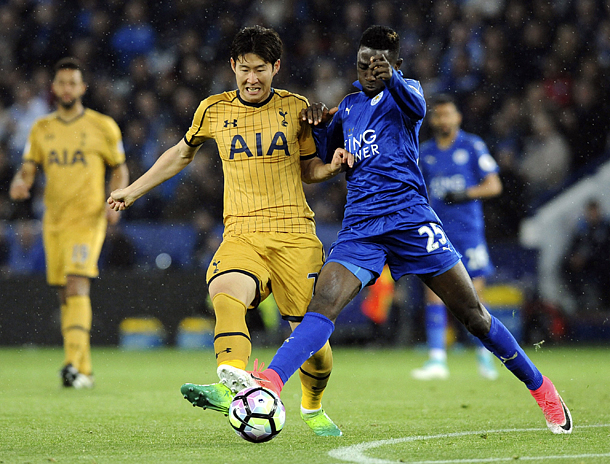 The record-setting performance this week by Tottenham Hotspur’s winger, Son Heung-min, is also a welcoming sight for the South Korean national team trying to qualify for the next FIFA World Cup.

Son scored twice against Leicester City in their Premier League match in Leicester on Thursday (local time), giving him 21 goals in all competitions this season. After a monthlong drought, Son finally moved past former star Cha Bum-kun as the top South Korean scorer in a European season. Cha scored 19 goals during the 1985-86 season for the German side Bayer Leverkusen.

And Son’s brace couldn’t have come at a better time for national team head coach Uli Stielike, who is scheduled to announce his roster for next month’s World Cup qualifier against Qatar on Monday.

Stielike had received some frustrating injury news regarding key offensive players in recent days. Forward Lee Jeong-hyeop, who has thrived under Stielike’s watch, hurt his right ankle in a domestic league match and will be unavailable against Qatar in Doha on June 13.

Attacking midfielder Koo Ja-cheol has rejoined his German club FC Augsburg after injuring his right knee last month but is far from 100 percent.

Against this backdrop, Son, one of the obvious picks for the national team, will return home on a high note. He has one more Premier League match left against Hull City on the weekend and is expected to join the national team camp on May 29.

With three matches remaining, South Korea is holding on to the last automatic qualification berth in Group A, sitting in second place with 13 points from four wins, one draw and two losses. Iran is leading the way with 17 points, while Uzbekistan is right behind South Korea at 12 points.

A string of poor performances once led calls for Stielike’s dismissal, but the Korea Football Association (KFA) gave him a vote of confidence and instead brought in experienced coach Jung Hae-sung as a new assistant to work with the German.

In all, this is a team that desperately needs a convincing victory, not just to improve its chances of extending the country’s consecutive World Cup finals appearance streak to nine but also to silence naysayers who aren’t pleased with Stielike’s lack of tactical acumen.

On a personal level, Son will also get a chance to redeem himself on the international stage, as he has been far from his usual self in recent contests.

He has 17 goals in 53 matches for South Korea, but none since last Oct. 6 against Qatar. He sat out the qualifier against China on March 23 on accumulated yellow cards and watched as South Korea suffered a 1-0 loss. He returned to action for the 1-0 win over Syria five days later but said afterward he wasn’t happy with his own performance.

It was Son’s second-half goal that secured South Korea’s 3-2 win over Qatar last October, and Stielike would love to see a similar performance from his winger again in June.