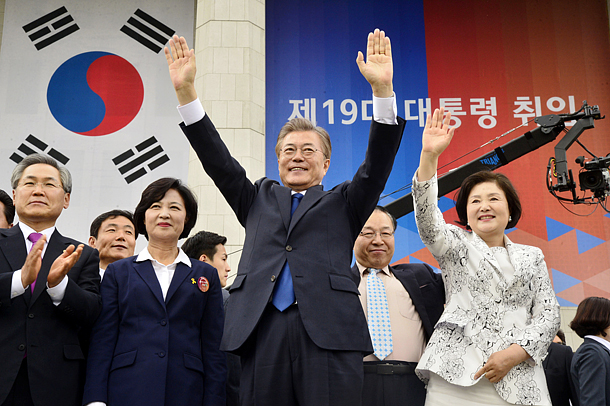 President Moon Jae-in, center, waves on May 10 after he was sworn in at an inauguration ceremony held in the National Assembly. [YONHAP]

He has been in office just a week, but President Moon Jae-in’s economic agenda has already been dubbed “J-nominics.” This shows the perception that he is eager and ambitious in defining his agenda. He aims for “economic growth for the people.”

Moon reasons that government investment in people will boost individual competitiveness and increase hiring and, ultimately, incomes. He aims to up spending on education, healthcare and medical care. At the same time, he would reform chaebol to contain unfair practices by large companies, increase jobs, and give more opportunities to small and mid-sized enterprises. He will increase budgetary spending to create 810,000 public-sector jobs. His agenda is focused on benefiting the people who have been neglected.

Such an agenda needs a strong economy. An active economy can create jobs. But since the global financial meltdown of 2008, growth has been losing 1 percentage point each year. Korea’s economy grew 2.7 percent last year and is expected to do the same this year. At the current rate, the economy could generate zero growth during Moon’s term of five years. Moon has no choice but to be ambitious and eager in his agenda.

Science and technological innovation is a key to reviving the economy and creating a new paradigm for growth. Germany, under Chancellor Angela Merkel, has been pursuing the so-called “Industrie 4.0” agenda, or digitalization and automation of the manufacturing sector, since 2011. The technology-rich country has been focused on revamping its manufacturing sector to lead the so-called fourth industrial revolution.

To draw manufactures back to Germany, it is offering innovative production ideas to make up for its relatively high labor cost with efficiency. The plan of establishing a cyber physical production system has been simplified to “Industie 4.0.”

Through automated systems, Germany has helped change the global industrial landscape. Adidas, which has been chasing cheap labor in Asia since 1993, opened the so-called “Speed Factory” in Ansbach, Germany, and Atlanta in the U.S. for shoemaking with robots and 3-D printers. The factory turns out 500,000 shoes a year with just 160 workers.

The digitalization of the production system allows production of customized shoes for customers around the world in various styles and types. The Siemens Electronics Plant in the small Bavarian city of Amberg produces programmable logic controls (PLCs) used for automating equipment. The factory not only makes them but also is run on the PLC-based automation. The factory is run 75 percent by robots and has a 0.001 percent defect ratio. Outsourcing and offshoring has become unnecessary.

Last year, I visited the Fraunhofer Institute for Machine Tools and Forming Technology in Chemnitz in eastern Germany. The institute has been developing automated factories and is close to perfecting a system maximizing human labor and robotics. Universities, research institutes, companies, and the government join forces to hone manufacturing competitiveness through innovations. Japan also aims to restore its industrial reputation through automation and robotics.

The government should be at the forefront of ushering companies and research institutes into the fourth industrial revolution by promoting key innovations like artificial intelligence, robotics, big data, the Internet of Things, autonomous vehicles, and 3-D printing.

The government and legislature must create a liberal environment for companies and universities. The Moon government must be able to stimulate growth based on new industries.