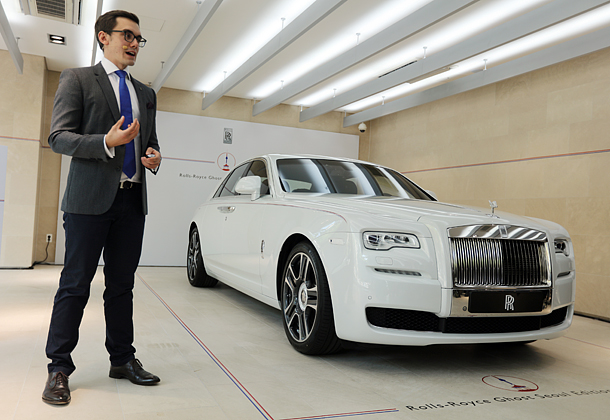 Rolls-Royce unveiled two special-edition models dedicated to Seoul and Busan in an attempt to build some buzz in Korea about its Bespoke program, which offers highly customized cars.

The Seoul edition of Rolls-Royce’s Ghost sedan is multicolored, using the white, black, red, and blue of the Korean national flag.

“Bespoke is like automotive tailoring,” said Mike Bryden, a bespoke designer at Rolls-Royce during a press event Friday at the company’s showroom in Cheongdam-dong in southern Seoul.

“[We were] inspired by the national colors of Seoul, the white, black, red and blue which are so significant for this unique country,” he added.

The exterior is white, which the company says symbolizes purity and hope, with slim blue and red lines on the sides. A stylized illustration of Seoul Tower is painted on the car’s C-Pillar, the vertical structure behind the rear door, and also features on the center console inside the car.

The Busan edition of the sportier Wraith model is painted blue and silver with pink lines on the sides, which the company says was inspired by the warm light of Busan’s Gwangandaegyo Bridge at night.

Rolls-Royce’s Bespoke program enables customers to customize their vehicles in terms of design, materials and more.

The customization process can take as long as two years.

“We wanted to show Korean customers what Rolls-Royce is capable of and how we are different from other carmakers,” he added.

The prices of the two editions hadn’t been decided. But the price of the Seoul edition is estimated at 560 million won ($497,000).

The two cars will be put on display and can be purchased.