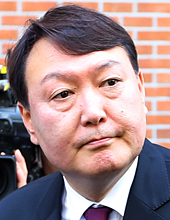 Yoon was assigned to the Park Young-soo special independent counsel that investigated the bribery scandal involving Park and Choi that led to the president’s impeachment and removal from office.

“The most important issue facing the prosecution is an investigation into an abuse of power scandal [implicating former President Park Geun-hye] and maintaining its indictment [of Park in court]. Taking those into account, I have concluded that Yoon is the most qualified candidate,” said Moon in a press briefing.

Yoon’s rise came after Lee Young-yeol, former chief of the Seoul Central District Prosecutors’ Office, was embroiled in a scandal over a dinner with Ahn Tae-gun, former director of the Criminal Affairs Bureau of the Ministry of Justice. Lee and Ahn, accompanied by their juniors, had dinner on April 21. Ahn gave the prosecutors envelopes of cash, each containing 700,000 won [$625] to 1 million won, and Lee gave 1 million won each to two officials of Ahn’s bureau.

Suspicions were raised about the dinner, as the seven prosecutors accompanying Lee were from the special investigation team that probed the abuse of power and corruption scandal involving Park.

During the probe, the prosecutors did not look into alleged connections between Ahn and Woo Byung-woo, former civil affairs senior secretary at the Park Blue House. An independent counsel investigation revealed that more than 1,000 phone calls between Ahn and Woo took place from July to October, when Woo was the target of a corruption probe, but the prosecution did not follow through.

In response to news reports on the dinner meeting, the prosecution and the Justice Ministry launched a massive joint investigation Thursday to find out the origins of the money and the nature of the money exchange.

To fill Ahn’s job at the Justice Ministry, Moon tapped Park Gyun-taek, head of the criminal affairs bureau at the Supreme Prosecutors’ Office.

Yoon’s promotion Friday is improbable taking into account what he has gone through over the years. Yoon earned national fame in 2013 when he revealed during a parliamentary hearing that his investigation into illegal meddling by the National Intelligence Service in the 2012 presidential election to help then-candidate Park Geun-hye was interfered with by his superiors.

Yoon’s remark came across as a shock to the elite investigative body, as it values loyalty to the chain of command. For the next few years, Yoon was assigned to regional prosecutorial branches in an apparent series of demotions. He returned to the media spotlight last December when he was called to work for the Park Young-soo independent council, which wrapped up a 90-day probe by indicting former President Park on 13 counts of bribery and abuse of power.

Moon also appointed Constitutional Court Justice Kim Yi-su as chief justice of the court on Friday. He has been acting chief justice. Newly appointed Chief Justice Kim is known to have liberal leanings. He was the only justice on a 9-member bench who objected to the forced dissolution of the leftist Unified Progressive Party in 2014. The UPP was dissolved for being pro-North Korea.