Tillerson says North should ‘trust us for once’

Tillerson says North should ‘trust us for once’ 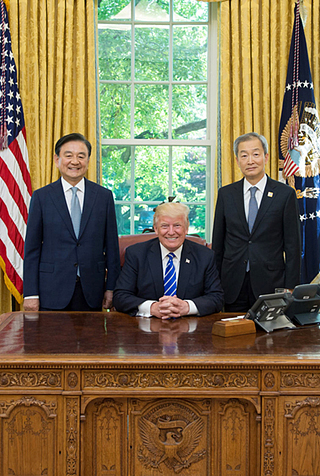 U.S. Secretary of State Rex Tillerson said Thursday in Washington that North Korea should “trust us for once” that it is not seeking regime change in the North or planning to invade the country, adding there was no reason for the United States to be hostile to North Korea if it denuclearizes.

The remarks were laid out to reporters by a South Korean official on President Moon Jae-in’s special delegation to the United States, led by Hong Seok-hyun. Hong, chairman of the Korean Peninsula Forum and a former U.S. ambassador under the liberal Roh Moo-hyun administration, arrived in Washington on Wednesday and met with U.S. President Donald Trump.

It was the first meeting between Trump and an envoy of the new Moon administration.

In a 40-minute meeting with Hong at the State Department headquarters in Washington, Tillerson was quoted as saying that Washington’s “open message” to Pyongyang was for it to halt all nuclear experiments and missile tests, and that it will not communicate with the North through any back channels. 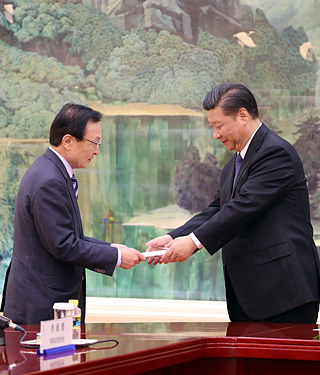 He said there were “many steps” the United States can take before it decides on military action, adding that those steps include “diplomatic, national security and economic tools.”

U.S. Ambassador to the United Nations Nikki Haley said in a press conference in New York Tuesday that Washington’s condition for dialogue with Pyongyang was a “total stop of the nuclear process and of any test there.”

Regarding the Terminal High Altitude Area Defense (Thaad) missile shield South Korea deployed in Seongju County, North Gyeongsang, Tillerson was quoted as telling Hong that China “appears to be weakening its sanctions” on Lotte, the South Korean conglomerate that gave up a golf course for the battery.

On his first visit to Seoul as state secretary in March, Tillerson called China’s economic retaliation “inappropriate and troubling,” and asked Beijing to “refrain from such action.” Although the U.S. “acknowledges” China’s opposition, Tillerson urged China to “address the threat that makes Thaad necessary.”

China fears that Thaad’s radar could be used to spy on its airspace, though Seoul and Washington maintain it will not.

Xi didn’t explicitly mention anything about Thaad in the meeting, said Lee, but stressed the importance of South Korean-Chinese relations.

Democratic Party Rep. Shim Jae-kwon, who is on South Korea’s delegation, said he was told by Yang Jiechi, China’s state councilor for foreign affairs, that Beijing was “deeply aware” of Seoul’s “concern” and that it would take “proper action.”

The date for a bilateral summit between Xi and Moon hasn’t been confirmed yet, South Korea’s delegation said.