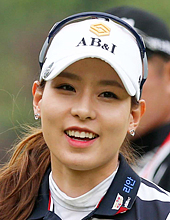 After a runner-up finish last week, Kim Char-young came back to win the 2017 Doosan Match play, defeating Park In-bee 3-and-2 at Ladena Golf Club in Gangwon on Sunday.

Although many expected Park, ranked first in the bracket, to easily win the tournament, Kim, ranked 23rd, took an early lead on the second, par-five with a birdie. But Park quickly turned the match back to square on the fourth hole. The two kept on going back and forth, with Kim going one up and the match going back to square until the ninth hole, par four. After winning the ninth hole with a par, Kim then won the 10th hole to extend her lead to two up with a birdie, making a 15-footer.

Then on the 12th, Kim made an eagle to get to three up against Park. Kim hit the green on second and got it as close as three feet to the pin. After, the two made pars until the 16th to finish the match three up.

“I played seven rounds in five days,” Kim said. “It feels like I played in two tournaments in a week. Since Park didn’t make that many mistakes, I tried really hard to keep myself focused.”

Prior to her match against Park, Kim played against Kim Hae-rym, playing until the 20th hole to win the match one up.

It was an impressive win for Kim as this is her fourth KLPGA tour victory in five years and a win against Park, an LPGA hall of famer. Following her 19th place finish in her rookie season, Kim made herself known in the KLPGA in 2012, winning three tournaments.

However, since her outstanding 2012, she hasn’t been able to win a tournament for five seasons.

From 2013 to 2016, Kim’s seasonal KLPGA tour money ranking didn’t get any higher than 30th and last year it dropped to as low as 57th. But this season she came back as a new player, finishing tied for fourth at the Lotte Rent-a-Car Championship in April and a runner-up finish at last week’s NH Investment & Securities Ladies Championship.

“I thought it would take longer for me to win a tournament,” Kim said after the round. “I’m glad I got to win earlier than expected.”

In a consolation match, Kim Hae-rym defeated Lee Seung-hyun 3-and-2.

The KLPGA tour will next be hosting the E1 Charity Open at South Springs, Incheon, starting from Friday.