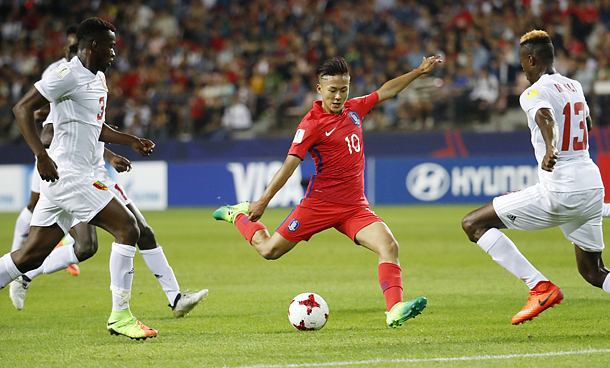 The U-20 Korean national football team got off to a great start in the U-20 FIFA World Cup group match, winning its first game against Guinea 3-0 at Jeonju World Cup Stadium in Jeonju on Saturday.

Though the stadium wasn’t sold out, a total of 37,500 fans were there to support the team.

The team, led by Shin Tae-yong, struggled in the beginning at the hands, or rather feet, of Guinea’s fast attackers.

However, it didn’t take long for Korea to get in the game, as Lee Seung-woo scored Korea’s first goal with a right foot in the 36th minute from outside the box. Shortly after, Cho Young-wook scored Korea’s second goal in the 45th minute, assisted by Lee, but it got cancelled as it was determined that the ball crossed the goal line before Lee made a cross through Video Assistant Referees system (VARs).

For the first time, FIFA acquired VARs for accuracy in decision determinants.

“If it did count as a goal, it would’ve helped Cho in gaining confidence,” Shin said after the game. “But I told the players not to think about the scores. And I told them that VARs will be a great opportunity for them to find sportsmanship.”

Korea didn’t let the decision discourage them, though - Lim Min-hyeok scored Korea’s second goal in the 81st to extend its lead 2-0. Lim, who was subbed into the game in the second half, received Lee’s through pass and successfully connected it to the net. Five minutes after, in the 86th minute, Paik scored another goal assisted by Jung Tae-wook’s heading.

“I am very happy to win,” Paik said after the game. “But we’ll be happy only for tonight and starting tomorrow, we’ll be preparing for our second game against Argentina.”

During the game against Guinea, the team had a 4-3-3 formation, with the Lee-Cho-Paik trio up front.

When Shin first got appointed as the head coach of the U-20 national team in November, he tried “tiki-taka,” a style of football play characterized by short passing and movements, to compete against the world’s best teams.

Since the start of the game, Lee’s hairstyle once again grabbed everyone’s attention, with the letters “SW” dyed in orange on the side of his head. There are two meanings behind this: his initials and an abbreviation for “six wins in a row.”

“Advancing to the finals isn’t my personal goal,” Lee said. “It is a goal everyone on our team wants to achieve. That is the reason why I expressed it through my hair.”

Since the U-20 FIFA World Cup was first played in 1977 in Tunisia, the event has been played once every two years in different countries.

With a total of 24 participating countries, 504 players, it is considered the second biggest event conducted by FIFA, after the FIFA World Cup.

Many star players, such as Diego Maradona, who scored six goals to lead the team to a win at the 1979 U-20 World Cup, have gone on to play for their countries in the FIFA World Cup. Other than Maradona, many more players - Lionel Messi of Argentina, Bebeto of Brazil, Thierry Henry and Paul Pogba of France, Michael Owen of England, Luis Figo of Portugal and Iker Casillas of Spain - have made their names known through the U-20 World Cup. And this may be why Lee and other key players have put so much effort into preparing for the event.

“There’s no such team as an easy team,” Paik said after the game. “Both Argentina and England have their own style of play. We’ll have to study it and prepare for our match.”

With a win, Korea is tied for the lead in Group A with England, who had a big 3-0 win against Argentina. Korea will next play against Argentina at Jeonju World Cup Stadium at 8 p.m. on Tuesday.