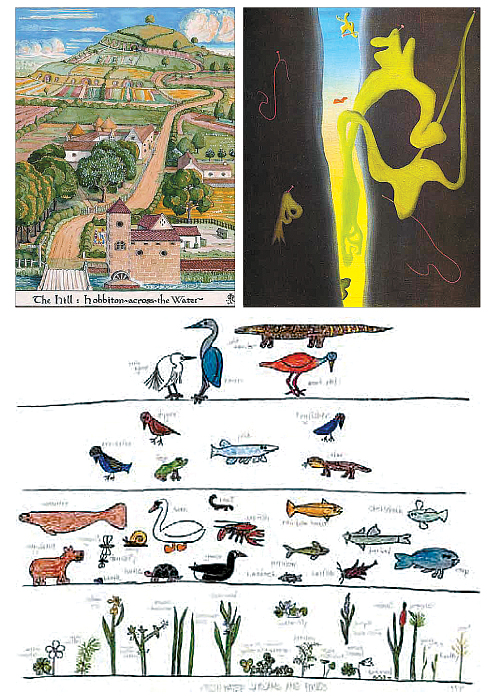 Clockwise from top left: A painting by J. R. R. Tolkien (1892-1973), which provides the basis for his classic high-fantasy works, “The Hobbit” and “The Lord of the Rings”; An imaginary world by Desmond Morris, who wrote “The Naked Ape,” drawn when he was 19; A scene from “Inventing Imaginary Worlds: From Childhood Play to Adult Creativity Across the Arts and Sciences.”[MOONYE PUBLISHING]

Since the historic battle between Korean Go player Lee Se-dol and AlphaGo, Google’s AI program, a key term in Korea has been the “fourth industrial revolution.”

And it’s perhaps safe to say that most people’s feelings toward the fourth industrial revolution are somewhat fearful.

They are not certain what it is - beside the fact that it has to do with AI and robots - and yet they are certain that if they continue to live the way they have, they may lose their jobs to someone, or something, else.

That perhaps explains why, according to a recent survey of 668 parents with children aged seven or younger, about half of respondents are giving additional, private education to their children.

The types of private education were Korean language (47.7 percent), mathematics (35.9) and creative thinking (33.6). This also shows how even by resorting to private education, Korean parents hope to help their children think differently.

Michele Root-Bernstein, who co-wrote “Sparks of Genius, The 13 Thinking Tools of the World’s Most Creative People” (Houghton Mifflin, 1999) with her husband and colleague, found that geniuses throughout history have one thing in common - they all created a virtual world when they were young.

Charlotte Bronte (1816-55) and her brother, Branwell, created the imaginary kingdom of Angria when she was young. Friedrich Wilhelm Nietzsche (1844-1900) and his brother also created an imaginary world where there lived King Squirrel. Irish author C.S. Lewis (1898-1963), who wrote the fantasy series “The Chronicles of Narnia,” and J. R. R. Tolkien (1892-1973), who wrote the classic high-fantasy works “The Hobbit” and “The Lord of the Rings,” also created fictional worlds.

So what does creating a world entail? It could include an ecosystem, animals, a mythology, languages, laws and so on. 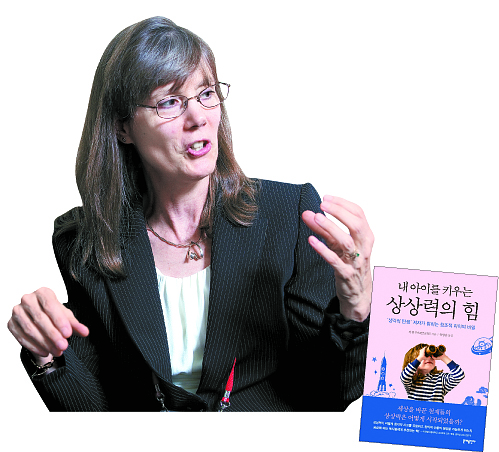 Michele Root-Bernstein is a historian and haiku writer. With her husband and collaborator, Robert Root-Bernstein, she studies the practice of creative imagination in all walks of life. Seen at the right is her book on worldplay, released in Korea last year, “Inventing Imaginary Worlds: From Childhood Play to Adult Creativity Across the Arts and Sciences.” [JOONGANG PHOTO]

Root-Bernstein calls the making up of imaginary worlds “worldplay,” and argues that it’s important for growing children, problem-solving adults and innovating societies.

“Worldplay can’t be forced,” she told the JoongAng Ilbo in a recent email interview. “But it can be nurtured with a light touch, like a wildflower that shows up unexpectedly in your garden.”

Root-Bernstein, who received her bachelor’s degree from the University of Pennsylvania in 1975 and her doctorate in history from Princeton University in 1981, first learned of worldplay as a parent.

Her daughter, who is now studying environmental conservation, created an imaginary world when she was nine, making a language, mythology, ecosystem, culture and a map. This continued until she was 19.

In her book, “Inventing Imaginary Worlds: From Childhood Play to Adult Creativity Across the Arts and Sciences,” which was published in Korea last year, she suggests that some 12 percent of children in the United States may be engaged in worldplay.

“Imaginary world invention is a natural part of human development, closely tied to the progression of play behaviors that begin in early childhood,” she said.

But Root-Bernstein emphasized that she advocates creative play for children as well as adults. “Taking some time in the day for creative play can be therapeutic,” she says. “Any absorbing interest that is voluntary and self-selected offers an escape.”

The following is an excerpt of her interview with the JoongAng Ilbo.

Q. How can parents, who have no experience of worldplay, encourage their children to take part in worldplay?

A. In “Inventing Imaginary Worlds,” I discuss some “rules of thumb” for parents who want to encourage their children to play well, to play imaginatively. First and foremost, parents can recognize that play is a child’s true work. They can and should provide a special place and time for play, as well as materials that can be repurposed to suit the needs of the moment. Above all, parents can and should grant their children a certain amount of privacy to play as they wish. It is important that parents not judge their children’s play or seek to meddle, but rather support and value whatever their children explore in make-believe.

As for encouraging worldplay, I suggest they casually introduce their children to the idea, perhaps by sharing their own worldplay or by asking simple questions. If a child is playing with her dolls, a parent might ask, “Where do these dolls go when the lights are out and you and I are asleep?” Or if a child is fascinated with trucks or trains, a parent might say, “I wonder if trains have to practice going so fast?” Create a sense of mystery or excitement - and then let the child take over and do the rest. If and when a child bubbles over with news about her dollbirds’ secret nest in the trees or the 100 meter dash for his trains, a parent might suggest drawing the nest or keeping a written record of race times for teams of trains. Whether or how the child does so is, however, entirely up to him or her.

How should parents support their children so that they enjoy worldplay over a long time, like your daughter?

Some children will take to worldplay like the proverbial duck to water. Chances are they enjoy the kind of solitary play that fosters a rich inner life of daydreams, private thoughts and personal knowledge. Parents who truly support their children’s play preferences will shield them from social and educational pressures to conform in all things all the time. In other words, supportive parents will give their children permission to take some time for solitude in a busy day of social game playing and sports.

This is not always easy to do, especially when teachers or other authority figures question a child’s continuing interest in dollbirds or train teams, no matter how complex the play. From their perspective, there may be “something wrong” with the child who does not conform to their expectations and “give up childish things.” But parents who understand that all sorts of problem-solving endeavors in the real world depend on the development of personal creativity will value worldplay for as long as the make-believe remains important to their children. Whether the play fades away with adolescence or persists into their teen years, however, is entirely up to the children.

Worldplay seems similar to writing fiction in that both of them create imaginary worlds. Do you agree?

Writing fiction is a form of worldplay, one that many adults engage in and enjoy. Many children who invent imaginary worlds also write stories. But not all. Worldplay may be expressed in many other ways, as well. Visually, in maps or drawings. Musically, in compositions or sung songs or invented notations. Statistically, in the records of imagined sports teams. What all these forms share, fundamentally, is a sense of narrative and pretense. I see no real difference between adult fiction writing and childhood worldplay, except that adult play is more focused and accomplished.

Would you recommend another type of creative play for the children who are unwilling to do worldplay?

I recommend any kind of creative play, by which I mean any play that involves constructing ideas and things to your own design and purpose. These constructions may be considered artistic and involve the making of stories, pictures, songs, dances, puppet plays and more. They may also be technological or scientific and involve, for example, programming your own computer game or building kites from scratch or paper airplanes that really fly. This is playful learning of the best sort - self-motivated, skill-building, and personally satisfying and fun. And, by the way, I advocate creative play for adults as well as children - and for many of the same reasons: exploration of self and world, creative agency and rejuvenation of mind and spirit.

Most Korean parents want their teenagers to study as many hours as possible. Would you tell these parents why it is important for their children to spend a part of the day on worldplay?

My answer begins with a question: how interested are Korean parents in nurturing creative potential in their children? How interested are they, as members of Korean society, in fostering conditions in Korea for the next Picasso, the next Einstein, the next Edison (to mention only a few innovative individuals)? If Korean parents answer, “very,” then they must cultivate creative gardens as well as fields of academic learning.

As the saying goes, all work and no play makes Jack a dull boy. The mind, especially the creative mind, needs relaxation and rejuvenation. That’s why you’ll find many Nobel Prize winners, for instance, take time for personally significant hobbies, even dual careers. What goes for Nobel Prize winners goes for children. Children reap the benefits of avocational endeavors.

Can you elaborate on those benefits?

For adults and children, taking some time in the day for creative play can be therapeutic as well as recreational. Any absorbing interest that is voluntary and self-selected offers an escape from the pressures of school and work. It renews interest in learning and exploring, even as it provides the emotional outlet of self-expression that too often goes missing in school or work. We go back to our studies or our work refreshed and eager to carry on.

If refreshment were all, that would be enough to justify regular creative play. But there’s more. In creative play, such as worldplay, we exercise our tools for thinking. We develop the self-discipline necessary to explore something of passionate interest to us. We gain experience with strategies for making and creating - for example, how to hunt for ideas and how to generate new ones. And when our schoolwork or our adult work calls on us to seek new solutions to new problems, these creative skills and behaviors transfer to the challenges at hand. A little creative play goes a long way in preparing for creative work, both for the individual and for society at large.