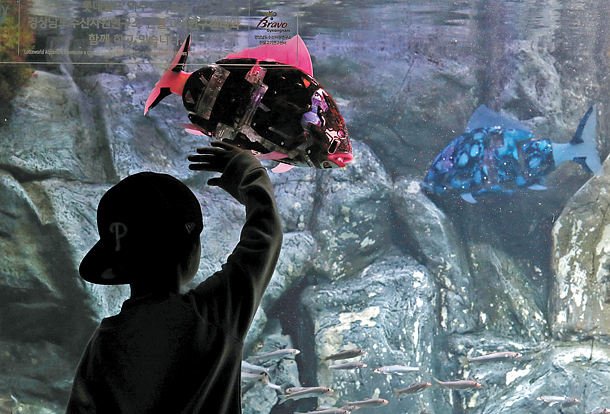 A school of robotic fish swims in a tank at the Lotte World Aquarium in southern Seoul. [KIM HYUNG-DONG]

Inside a large tank at the Lotte World Aquarium in southern Seoul, a school of luminous fish which appear to be sea breams makes its way through the water.

But look closely, and one will notice that there’s something peculiar about the fish.

They are, in fact, robots with red and blue LED lights giving off the luminescence.

Dubbed MIRO (pronounced mairo), the robotic fish are now only display just for show, but the hope is that they might be able to perform functions like water purification and monitoring.

The robot’s head contains a central processing unit and sensors to give it movement, and its interactions are based on infrared light. It is powered by 84-kilowatt lithium battery that can last around 22 hours underwater, and it comes with a hefty price tag: 4 to 10 million won ($3,570 to $8,930).

MIRO is the brainchild of Oh Yong-joo, CEO of Airo, a robotics start-up headquartered in the port city of Suncheon in South Jeolla. Airo has produced more than 200 types of robotic fish and exported them to countries including Japan and Singapore.

“Robotic fish are more popular abroad than in Korea,” the 53-year-old CEO said. “We plan to market our lineup of fish to global aquariums and ocean theme parks.”

Airo is also working on creating robotic fish that have gone extinct, including coelacanth, a large lobe-finned fish that largely disappeared in the early 1900s.

The company’s revenue stands at 1.5 billion won, but it hopes to expand both its presence abroad and its range of products. Airo believes that marine robots can be developed to transform into different shapes and colors depending on customers’ needs.

“We use a 3-D modeling program to produce various types of ornamental skins and determine the kinds of fish such as carp, arowana, shark and others,” the company’s website says. “On each ornamental skin, there can technically be printed an unlimited number of design patterns as requested by customers.”

MIRO is reminiscent of a robotic fish made by the Korea Institute of Industrial Technology, a state-run research institute. But the project ended after the Korean Board of Audit and Inspection raised doubts about its functionality.

The institute initially reported the robotic fish could swim up to 2.5 meters per second (8.2 feet per second) and communicate at 4,800 beats per second.

However, the audit board’s investigation found that it was only able to travel 23 centimeters per second and transmit much more slowly at 200 beats per second.