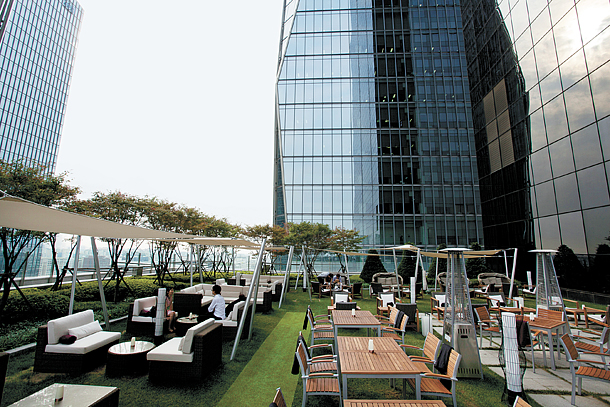 The view of the rooftop grill and bar VVertigo of Conrad Seoul in Yeouido, western Seoul, was opened last year. It is located on the ninth floor. [JOONGANG ILBO]

It was 4 p.m. on a Friday afternoon, just a few hours before the dinner rush. The first floor of an Italian restaurant on Gyeongnidan-gil, a central Seoul street dotted with trendy bars and eateries, was relatively quiet. A few early birds were pecking at plates of garlic bread and pasta.

But on the second floor - which was actually the restaurant’s roof - the place was packed with people drinking beer and snacking on fried dishes.

Three years ago, this rooftop was covered with plants and miscellaneous knick-knacks that the business downstairs didn’t know where to put.

Basically, it was a storage space.

But things changed when a new tenant moved in and signed a lease to utilize the building’s roof. With just a few tables and simple decoration, the space was easily turned into a restaurant. The owner fittingly named the place “Rooftop Bar.”

“The roof feels more comfortable than the terrace on the first floor, where you are more disturbed by people passing by on the street and the dust,” said one patron of Rooftop Bar. “I come here two or three times a month to enjoy the sunset while drinking my beer.”

The rooftops of commercial buildings, previously considered unusable space, are transforming into trendy hot spots as restaurants, bars and even department store are making full use of their land.

Traditionally, the first floor of a commercial building has been called the “royal floor.” Not only are businesses in this space easily visible, they are accessible, and because of this, higher floors tend to have cheaper leases.

But the mood is changing, especially in commercial areas popular with the younger set in their 20s and 30s like the university neighborhood of Hongdae, Itaewon’s Gyeongnidan-gil and Sinsa-dong’s Garosu-gil. More rooftops in these areas are turning into restaurants, and they are catering to a cosmopolitan crowd, selling imported beer and wine and serving European cuisine. With these locales gaining popularity, the rent is also going through the roof.

The top floor of a building in Gyeongnidan-gil is now more expensive than the first floor. Same goes for high-rent buildings in the posh neighborhood of Cheongdam-dong, where the rent on the roof of one five-story building is 300,000 won per 3.3 square meters ($7.50 per square foot).

“Some rooftops that have already had landscaping done are more expensive than the first floor thanks to the ‘rooftop premium’,” said Park Dae-beom at real estate management company Taekyung Partners. “Nowadays, the number of building and store owners trying to furnish their rooftops is increasing.”

It’s not just restaurants and watering holes taking to the skies. Department stores are also trying to reinvent the rooftop, which in the past has usually been left empty.

Shinsegae Department Store turned the roof of its Daegu location into a jungle-themed park. Since opening in December, the park has been attracting about 8,000 visitors a day.

Mr. Han, a local resident, said he and his family frequent Shinsegae Department Store just to visit the rooftop park. One Saturday morning, the space was filled with kids running around and playing with the giant statues of elephants, giraffes and rhinoceroses that covered the area.

“My 5-year old son loves animals, so we came to the department store to visit Zooraji,” Han said, referring to the park’s name. “But since we’re here, we’re thinking of buying some summer pants and shoes, too.”

Recognizing the attraction’s potential to draw customers, Shinsegae Department Store opened a Pororo-themed rooftop park at its Gimhae location. Pororo, an anthropomorphic penguin in an oversized aviator helmet, is a popular cartoon character among children in Korea.

At its Gangnam and Uijeongbu locations, Shinsegae Department Store installed gardens on the roof.

Not to be outdone, Lotte Department Store has a sports-themed rooftop park at its Cheongnyangni location in northeastern Seoul with a small basketball and football court for children. The department store’s Nowon location has a rooftop ecological park with a small pond.

“Since we recreated our rooftop, it has become a hot spot in the neighborhood and increased the number of visitors [to the department store] to more than 15 percent,” said Chang Dong-ho, head of the Cheongnyangni Lotte Department Store.

Rooftops have been attracting customers because of growing preference for unique spaces. For commercial building owners, it means another way to profit from their space. They can charge higher rent by throwing in the roof to top-floor renters or leasing the roof separately.

And department stores can attract more customers without giving up store or restaurant space inside.

“Department stores need places that can entertain and attract customers, but it isn’t easy to create a separate space when they are already filled with stores,” said Park Soon-min, who is in charge of sales strategy at Shinsegae Department Store. “A differentiated rooftop has become an important pillar of a department store’s competitiveness.”