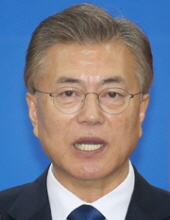 President Moon Jae-in on Sunday announced his picks for the new finance and foreign ministers, while appointing his new chief security advisor.

Kim Dong-yeon, president of Ajou University, has been tapped as the new finance minister, who doubles as a vice prime minister, the president said at a press conference.

The earlier-than-expected announcement apparently highlights the importance of economic problems the country is facing and the importance the chief executive places on the economy.

Still, the focus of the latest personnel reshuffle is centered on security as the president also named his nominee for new foreign minister, chief of the National Security Office and two special envoys on security and diplomatic issues.

Kang Kyung-hwa, a special advisor to the U.N. secretary-general, has been named to head the foreign ministry.

Chung Eui-yong, a former lawmaker who has been leading a special security advisory group for Moon since the president came into office on May 10, has been appointed to head the National Security Office.

Moon Chung-in, an honorary professor at Seoul's Yonsei University, and Hong Seok-hyun, former head of a local newspaper and former ambassador to the United States, have been named special envoys for diplomatic and security issues, Moon said.