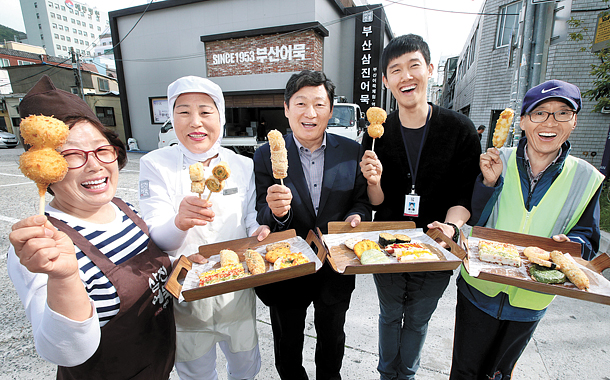 After President Moon Jae-in announced his plan to scrap the public sector’s contract employment system during his presidency, one company, Samjin Fish Cake, is receiving attention for having hired 100 percent of its employees, 475 of them, as salaried workers over the years.

“Ever since I started working here, I’ve had regular income for the first time in my life,” said Kim Sang-cheol, a 57-year-old parking assistant at the company’s headquarters in Busan. “I even opened up an installment savings account for the first time two years ago.”

“Now that I have a steady income, my life finally feels settled down and even when some customers get cranky at me during my parking duties, it’s no trouble when I think of how lucky I am to be working at such a stable job at this age,” Kim said. “I want to work here as long as possible.”

“I’ve worked here and there but never as a salaried worker,” said Lee Jeong-boon, a 69-year-old who was hired as a janitor last October. “Now I can finally make a living on my own without relying on my children. It’s not easy, cleaning after this place where some 3,000 customers come and go every day, but I feel at home here.”

Imam Abdul Qolis, an Indonesian who started working at Samjin Fish Cake in May 2015, got married the following month and was able to stay in Indonesia on his honeymoon for a month.

“I couldn’t imagine taking a month off at my previous job as a contract worker at a metal company,” Qolis said. “My work visa ends this October, so I will have to visit Indonesia and return. The company said that it will keep me on after I come back. I am living my dream.”

The strategy worked, and the company’s sales jumped from 8.2 billion won ($7.3 million) in 2013 to 70 billion won in 2016. The company opened up 15 franchise stores outside Busan, including in Seoul, Daegu, Daejeon and Cheonan.

Its number of employees also increased from 45 in 2013 to 175 last year, all hired as salaried workers.

“An employee is a family member to me,” said Park Jong-su, president of Samjin Fish Cake. “So I never thought about hiring one as a contract worker. Our sales jumped because the employees all work so hard. And that’s also helping us hire everyone as salaried workers, too.”

Park added, “It is my job to find them a workplace for life.”

More jobs-seekers have gotten wind of the working conditions at Samjin Fish Cake. Last year, the recruitment competition was 160 to 1.

“If I were hired at a conglomerate, I would be working like a machine, worried that I may become useless to the company and be replaced by another recruit one day,” said Kang Moon-gu, a manager. “But here at Samjin Fish Cake, things are quite stable and opportunities to try out new ideas abound. I see some of my ideas that I put forward at meetings actually being realized in the business and that’s a real good feeling as an employee.”