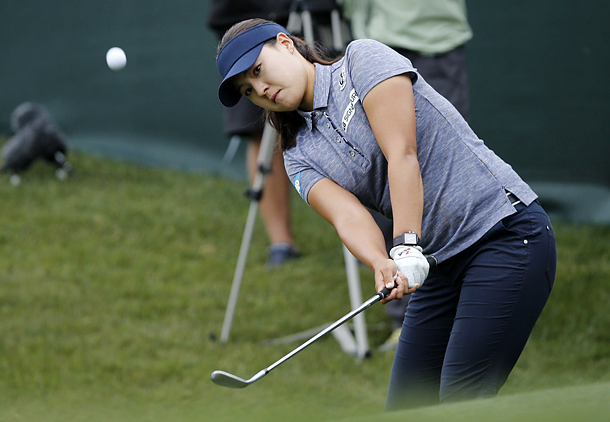 Chun In-gee chips during the final round of the Kingsmill Championship presented by JTBC in Williamsburg, Virginia on Sunday. [AP/YONHAP]

Chun In-gee, the LPGA tour’s two-time major champion, came up short of winning her first tournament of the season, finishing as runner-up at the Kingsmill Championship presented by JTBC in Williamsburg, Virginia, on Sunday.

Prior to the final round, Chun was three shots behind Lexi Thompson, the leader. Chun shot a bogey-free round of 66, but it wasn’t good enough to overcome the three shots. Chun patiently waited for her chance, maintaining the three-shots with Thompson in the front nine with birdies on third, fifth and seventh hole.

But with Thompson’s birdies on 14th and 15th, the lead got extended to five shots. Though Chun played a great round, shooting another under-par round, with Thompson’s outstanding putting, rolling in majority of the putts, it wasn’t enough for Chun to win the event.

“I had great round today,” Chun said after the round quoted by LPGA. “I made bogey-free round, but her play was so good. Really enjoyed playing with her. I learned a lot from her today. I want to say congratulations to Lexi and thank you to all the spectators.”

Meanwhile, Thompson, who gave away her chance of winning from viewer’s report at ANA Inspiration in April, captured her eighth LPGA tour victory at 20 under-par. Aside from a win, Thompson had her very first wire-to-wire victory and set the new tournament record, breaking Annika Sorenstam’s record of 19 under-par set in 2008.

When Chun joined the LPGA tour in 2016, she was considered the super-rookie on the tour, winning the 2015 U.S. Women’s Open in her first appearance as a non-LPGA tour member.

Not only that, in 2015, Chun won major tournaments on three different tours, LPGA, KLPGA and JLPGA, becoming the first player in history to do so.

In her rookie season, Chun won another LPGA tour major, the 2016 Evian Championship, with a score of 21 under-par, the lowest winning score in a major tournament for either men or women, and was named the 2016 rookie of the year.

On Thursday, the LPGA Volvik Championship will kick off in Ann Arbor, Michigan.