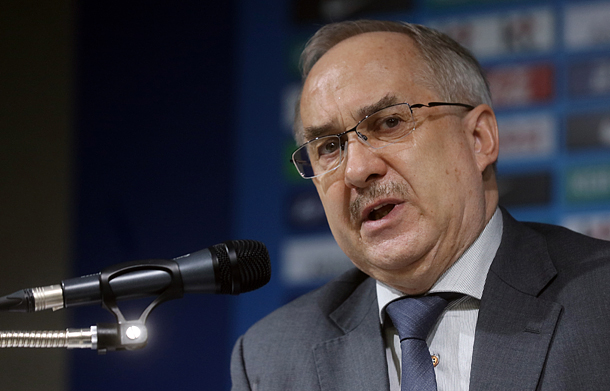 Uli Stielike, head coach of the Korean national football team, speaks during a press conference in Seoul on Monday. [YONHAP]

Criticism towards Stielike might have helped in his decision, as he made changes to almost half the roster. Now the Korean national team will undergo preparation for its final FIFA World Cup qualification match.

Rather than looking at surprise picks, Stielike brought back veteran players, including Lee Chung-yong of Crystal Palace and Park Joo-ho of Borussia Dortmund.

“To come up with this roster, I referenced players’ past experience,” Stielike said. “In our recent game against China and Syria, some of the players weren’t able to overcome the pressure, preventing them from playing the game.”

When asked about the reasoning behind choosing Lee, he said Lee is his wild card.

“For the team to be united and to get stronger mentally, I figured it would be better to have players with experience,” Stielike explained. “When we are at a situation where no mistakes can be accepted, we need a player who can balance the team and lead them through the rest of the game.”

“I didn’t take into much consideration in Lee Keun-ho’s past experience playing in the Qatar league,” Stielike said. “But through the recent game against FC Seoul, I saw his sharpness back in form.”

Other than Lee Keun-ho, Lee Jae-sung of Jeonbuk Hyundai Motors made his return from an injury. Lee Jae-sung spent the majority of his time rehabilitating from a leg injury all season. After his absence, he successfully made his return to Jeonbuk, scoring his first goal of the season in Jeonbuk’s K-League Classic match against Incheon United last weekend.

With the addition of Lee Jae-sung, Stielike strengthened the team’s midfield.

Two players, Jeju United’s midfielders Hwang Il-su and Lee Chang-min, made it to the national team for the first time in their careers. Now Jeju, the current leader in the K-League Classic, has two national team members on the team.

“Jeju is the only K-League team continuing its way in the Asian Football Confederation Champions League,” Stielike said. “I paid close attention to the two players.”

Kwak Tae-hwi, who Stielike said is a great spiritual leader, was included on the roster. Koo Ja-cheol of FC Augsburg and Lee Jeong-hyeop of Busan IPark were excluded from the roster due to injuries. Other notable players, such as Kim Shin-wook and Kim Bo-kyung of Jeonbuk, failed to make it on the roster.

From May 29 to June 2, players will be commuting to and from the National Football Center in Paju, Gyeonggi. Then, on June 3, the team will travel to the United Arab Emirates to play a tune-up match against Iraq before heading to Qatar on June 10 to play their eighth qualification match.

The Korean national team is currently ranked second in the group with four wins, one tie and two losses, totaling 13 points, one point ahead of Uzbekistan but four points behind Iran. Since only the top two teams advance to the World Cup, Korea will have to maintain its spot to make their way to the World Cup for the ninth consecutive time.

“We are at a very important point,” Stielike said during the press conference. “To maintain our standing to advance to the World Cup, every point in the remaining three games are important. Unlike other call-ups, we got some time.”