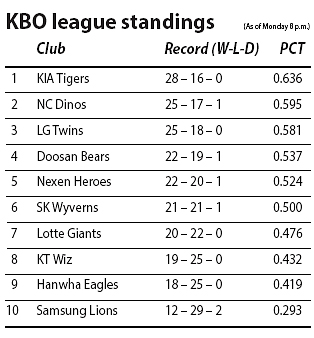 The KBO standings, which seemed steady, have started to shift.

Looking at the number of teams last week, the Samsung Lions, ranked last in the KBO, had the most wins. Since the opening game on March 31 to May 14, the Lions have only won seven games. But the Lions started their move, winning five games in six days. For the first time this season, the Lions won a three game series against the Hanwha Eagles over the weekend. Though the two teams had a bench-clearing brawl at Sunday’s game, the Lions still managed to win 8-7.

While the Lions are on the rise, the KT Wiz and the Eagles struggled, only winning one of their six games. Now, the Lions have only five game against the Eagles and are 5.5 games above the Wiz. It may seem like a large gap if the KBO were at the end of the season, but since there are more than 100 games remaining, the Lions can easily lose those leads.

The Kia Tigers, who were dominating the KBO, achieved the first 10 and 20 wins this season, took a step back, losing all three games against the Doosan Bears over the weekend. Thus, the Bears are now slowly making their way to another regular season win. Since the Bears are scheduled to play three games against the LG Twins, ranked second, starting today, there’s a possibility for another change in the KBO standing. 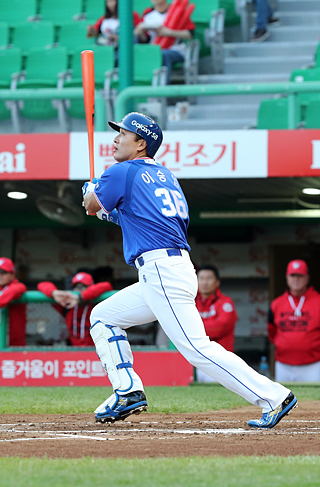 Lee Seung-yuop of the Samsung Lions continues to break his record in career home runs in his last KBO season.

Throughout the Lions’ three game series against the Hanwha Eagles over the weekend, Lee hit two home runs to achieve his 450th career home run and seventh in the season. Lee improved his batting average to 0.281 with 23 runs batted in. Over the weekend, Lee went seven-for-22 and five RBIs.

Lee is dominant in home runs with Yang Joon-hyuk, formerly of the Lions, is ranked second at 351 career home runs. Although Lee Ho-joon of the NC Dinos is still active in the KBO with 330 career home runs, and is ranked third, it is unlikely he will surpass Lee Seung-yuop’s record as he also announced he will retire upon completion of the 2017 season.

Lee made his KBO debut with the Lions in 1995 and hit his very first career home run against the Kia Tigers in May 2, 1995. And four seasons after that on May 5, 1999, Lee hit his 100th career home run, becoming the youngest KBO player, at 22, to hit 100 home runs. Throughout his career with the Lions, Lee has won multiple awards, taking the KBO League MVP five times, the KBO League Golden Glove Award nine times, the Korean Series MVP and the Korean Series Champion four times.

After an outstanding nine seasons with the Lions, Lee then played in Nippon Professional Baseball for seven seasons, where he hit 159 home runs. While playing in the NPB, his team won the Japan Series twice. Looking at his total number of home runs in KBO and NPB, Lee hit 609 as of Monday.