New exhibit offers visitors time of their life : Films, paintings and performances will be featured at Culture Station Seoul 284

New exhibit offers visitors time of their life : Films, paintings and performances will be featured at Culture Station Seoul 284 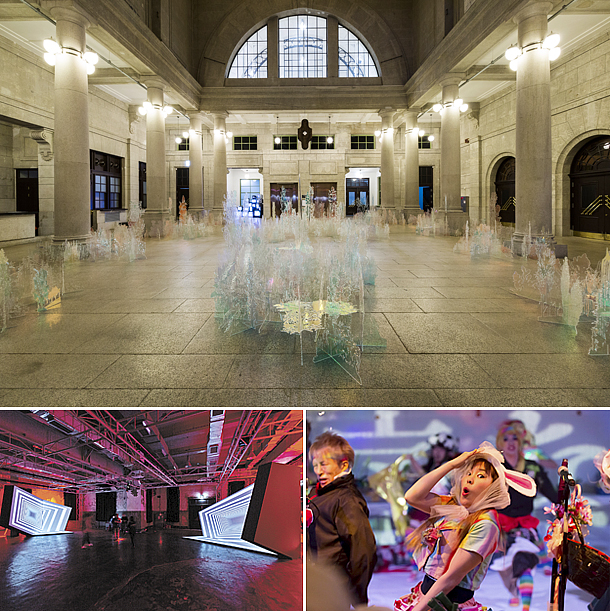 Culture Station 284 is currently holding an exhibition about time, using various art media. Participating artists include Buhm Hong, whose works include “Memory Weeds,” top, on display at the main hall, and “Trickling Down Thoughts,” which can be seen suspended from the ceiling in the same image. Olivier Ratsi’s “Delta” is displayed in the old Railroad Transportation Office, above left. There will also be performances, including a media performance titled “Crazy Girls Save the World,” above right. [KCDF]

Although Culture Station Seoul 284, or the old Seoul Train Station built in 1929 next to the current Seoul Station in central Seoul, can no longer physically take travelers anywhere, its current exhibition attempts to take visitors on a journey through time.

The exhibition, titled “Project 284: The Clock of Time Traveler,” which kicked off on May 17, is organized by the Korea Craft and Design Foundation (KCDF), which invited 17 artists and artist groups from Korea and beyond to showcase about 76 works in the large two-story venue.

In addition, 11 performing art groups will be staging different works during the exhibition, which runs until July 23.

There’s no need to be taken aback by such extensive works, as they cover diverse forms of art ranging from interactive media art and installations to modern dance performances and theater, all sharing the theme of “time travel.”

According to Shin, the artists, who are showcasing their works in three different sections, tried to focus on how to harmonize this old space with contemporary art so that visitors can feel the lapse of time inside the building.

“We thought about how the past and the future meets the present, and tried to show that through our memories and imagination,” said Shin.

That is why Shin divided the exhibition into three parts - “The Past: the positive clock,” “The Future: the oriented clock” and “The Present: the pleasure clock.”

The main hall of Culture Station Seoul 284 exhibits three works by local artist Buhm Hong. His “Memory Weeds” installation was formed using acrylic, while his “Trickling down thoughts,” a music box hanging on the ceiling, plays tunes from a music roll he created from his own doodles.

Hong says it is his “imagination transported into artwork.”

Hong adds, “My work is about using the memories of my past. For example, the weeds that have been scanned, printed and cut in acrylic and rainbow sheets are my own drawings, or more like doodles I drew while thinking about the past and my memories. So the weeds I drew when I was irritated, the weeds are very sharp and spiky.”

Another work worth taking in is the media installation titled “Delta” by Olivier Ratsi in the Railroad Transportation Office. According to Shin, this work is a part of the artist’s ongoing project, which is called “Echolyse.”

“The video of a red image and moving lines are projected on two and three dimensional structures, and with the addition of sound, the piece throws the visitors’ sense into confusion,” said the artist. “By standing on a spot marked on the floor of the room, visitors will be able to have an unfamiliar experience, as if he or she is in outer space. In a sense, the audience steps into a world that transcends time and space.”

As for the film screenings, the works include “The Time Machine” (1960), which will be shown until this week, and the “Back to the Future” series, which will be screened from today until May 28.

For screening timetables as well as performance schedules, visit www.seoul284.org.

The exhibition runs until July 23. The venue opens everyday except on Mondays. It starts at 10 p.m. and closes at 7 p.m. Admission is free.