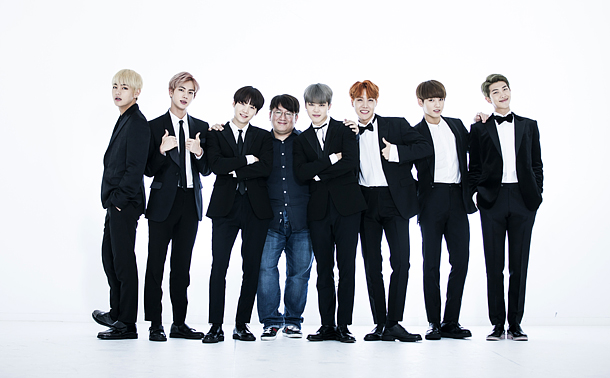 On Saturday local time, the popular group received the Top Social Artist award at the T-Mobile Arena in Las Vegas. The seven-member group beat Justin Bieber, Selena Gomez, Ariana Grande and Shawn Mendes, who were nominated in the category.

Upon receiving the trophy, Rap Monster, the leader of the group, said, “I love you and thank you. We will try to become a better group.” As soon as the group was announced the winner, cheers went up from spectators.

The winner was chosen based on album and digital song sales, streaming, radio airplay, touring and social engagement for one year starting from March 18 last year, as well as the result of a global online vote by fans, the awards organizer said.

This marked the first time that the ceremony actually took place on stage. Since the category first started in 2011, the winner had been announced on a Web site.

The seven-member group has a strong presence on Twitter and Instagram. In March 2016, Forbes named it the most retweeted artist.

Four albums by the group, including “Spring Day” and “You Never Walk Alone,” cracked the Billboard 200, an astonishing achievement for a K-pop group that sings in Korean and rarely promotes its albums in America. Yonhap