Kakao Taxi customers can hail a cab in Japan

Kakao Taxi customers can hail a cab in Japan 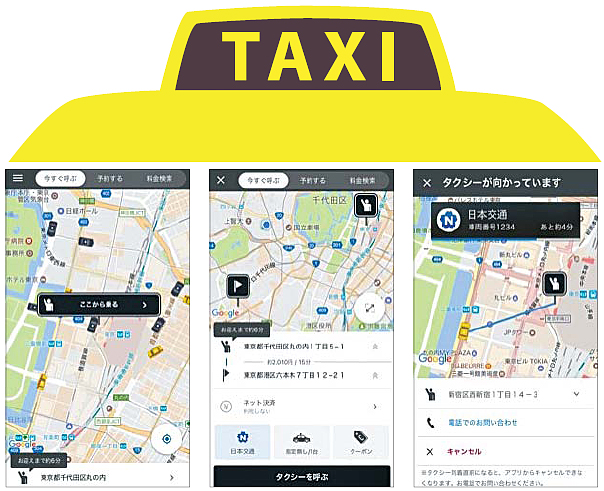 The photo shows JapanTaxi’s taxi-hailing app. From left, a display of the Japanese app when it is activated, when calling a cab and when checking the real-time position of the hailed taxi. [KAKAO]

Kakao’s taxi-hailing service will soon be available in Japan, as the company searches for viable foreign markets to tap.

The partnership will enable users of the KakaoTaxi app to call cabs in Japan and JapanTaxi users to book cabs in Korea.

Japan was chosen as the first country to enter as it is a frequent destination for Koreans and the number of travelers increases rapidly every year.

“Last year alone, over 5 million Korean travelers visited Japan and that’s why we put priority in inking a partnership with Japan,” said Jung Joo-hwan, head of Kakao’s mobility business. According to Jung, there have been requests from multiple foreign companies to connect taxi-hailing services with Kakao after the launch of the KakaoTaxi service in 2015.

The cooperation with Kakao is also JapanTaxi’s first foreign partnership. “We chose to partner with Kakao before others because the number of people traveling between Korea and Japan has been increasing by 130 percent annually and we are ahead of the PyeongChang Winter Olympic Games in 2018 and Tokyo Olympic Games in 2020,” said JapanTaxi CEO Ichiro Kawanabe.

The partnership also means the companies can expand their share of the consumer pie. Kakao hopes to further expand its target consumers by looking overseas.

“We are also considering partnerships with other countries but there is no imminent deal to take place,” a spokesperson from Kakao said. “The MOU is only the beginning of cooperation with the Japanese company and the official launch date for the connected service between the two apps is yet to be decided.”

The two-year-old Kakao Taxi app is used by 245,000 taxi drivers nationwide and roughly 14.5 million registered customers. In a day, up to 1.5 million calls for taxis are made through the app and data from Kakao on Monday shows the app has matched customers and drivers for an accumulated 220 million rides.

The app has been attracting more consumers by continuing upgrades in its service. The latest upgrade added last week is a voice-search function, which enables users to call out the name of the destination without finger-typing. The service is powered by Kakao’s voice-recognizing engine, the NewTone.