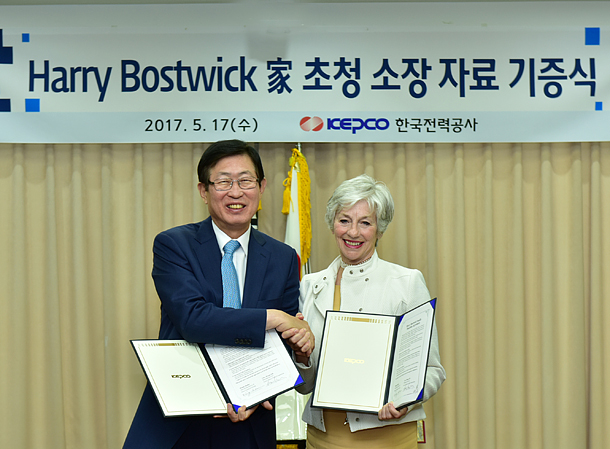 Hansung, which was established in 1898, was the first company to turn on electric lights at Gyeongbok Palace in central Seoul. Later it lit three streetlamps in Jongno District, the first ever lighting in a public area in the country. Bostwick and Henry Collbran formed a joint venture and became business partner of the Korean-run Hansung Electric.

Kepco said Bostwick’s granddaughter Wendy Sadler and grandson Griff Williams III visited the company’s headquarters in Naju, South Jeolla, last week and donated records such as letters between then-King Gojong and Bostwick and Collbran, photos of Hansung Electric in its early days, and newspaper articles about the utility, Kepco said in a press release.

“We were able to find out about the roots of the country’s electricity history,” said Cho Hwan-eik, CEO of Kepco. “The records are assets of the country and we will give full support, while allowing them to be public, so that they can be used for research purposes.”