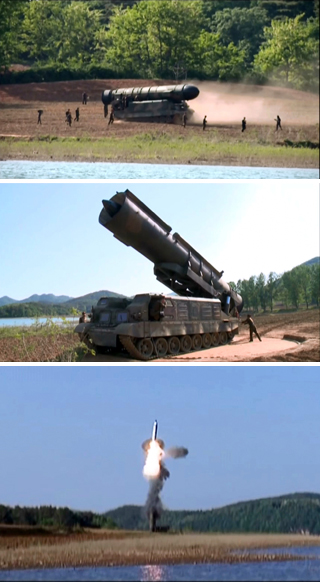 North Korea said Monday the ballistic missile it test-fired a day earlier was an intermediate-range Pukguksong-2, adding that it now can be “rapidly mass-produced” and deployed for military action.

South Korea’s military said its analytical data proved so far that North Korea did “appear to have tested something similar to a Pukguksong-2” for the second time Sunday, but that the Pukguksong-2 was assessed by local authorities to be a medium-range ballistic missile, not an intermediate-range one as Pyongyang claims.

The first Pukguksong-2 test was on Feb. 12 from Banghyon Air Base in North Pyongan Province. The missile peaked at an altitude of 550 kilometers and flew 500 kilometers before landing off North’s east coast. South Korea’s National Intelligence Service (NIS) said then that the missile was technologically advanced enough to “unnerve Washington” because North Korea significantly improved its “missile load capacity” and used a solid-fuel powered engine, which enables a missile to be launched on very short notice in comparison to a liquid-fuel powered engine.

North Korea’s most recent missile test, its eighth this year, was carried out at 4:59 p.m. Sunday from Pukchang, in South Pyongan Province, the central part of the country, and saw the projectile fly 550 kilometers after peaking at a height of 500 kilometers. It landed in the East Sea.

The launch was five hours after South Korean President Moon Jae-in announced his nominees for national security advisor and foreign minister. Local military officials said North Korea usually tests missiles on a prearranged schedule, but if “external circumstances” were considered at the last minute, Pyongyang might have intended to “enhance its bargaining power” in inter-Korea talks, or gain the upper hand over Moon.

Moon said last week he was open to inter-Korea dialogue but only if the North “changed its behavior” and stopped testing missiles and nuclear weapons.

Pyongyang said through its state-controlled Korean Central News Agency (KCNA) Monday in English that the Pukguksong-2 missile was “aimed to finally verify all the technical indexes of the weapon system and thoroughly examine its adaptability under various battle conditions, before its deployment at military units for action.”

Leader Kim Jong-un, who personally directed the launch, was deeply satisfied with the results, calling it “perfect,” according to KCNA.

Kim “approved the deployment of this weapon system for action.” Now that its tactical and technical data met the requirements of the ruling Workers’ Party, Kim declared the Pukguksong-2 “should be rapidly mass-produced in a serial way to arm” the Korean People’s Army’s strategic force.

In another KCNA dispatch issued Monday, the North said the ballistic missile it tested on May 14, the Hwasong-12, had the capacity to hit Hawaii and Alaska, which would qualify it as an intercontinental ballistic missile, or one that can fly more than 5,500 kilometers.

South Korea’s military downplayed this assertion, saying the missile’s flight range was projected to be less than 4,500 kilometers, not long enough to hit the U.S. mainland but able to target U.S. military bases in Guam, about 3,400 kilometers away from the North.

Moon did not make any remarks on Sunday’s missile test yet, but South Korea’s Foreign Affairs Ministry said its special representative for six-party talks on North Korean denuclearization, Kim Hong-kyun, had separate telephone conversations with his American and Japanese counterparts Sunday evening.

The six-party talks involving the two Koreas, China, Japan, Russia and the U.S. were initiated in 2003 with the aim of convincing Pyongyang to abandon its nuclear ambitions and resolve security concerns on the peninsula. That multilateral dialogue has been suspended since 2008 after North Korea walked away.

U.S. Secretary of State Rex Tillerson said in an interview with Fox News Sunday that North Korea’s ongoing missile tests were “disappointing” and “disturbing,” continuing that economic and diplomatic pressure will continuously be applied to the regime. President Donald Trump was in Saudi Arabia on his first foreign trip.

China’s foreign ministry spokeswoman Hua Chunying said Monday in a daily briefing that all parties must “remain calm and exercise restraint” in the aftermath of the missile test, according to Reuters. Hua reportedly stressed Beijing was opposed to the North’s missile activities.

The UN Security Council will hold an emergency meeting this week in response to the latest test at the request of the U.S., Japanese and South Korean missions.