Park Geun-hye to appear in court in first hearing tomorrow

Park Geun-hye to appear in court in first hearing tomorrow 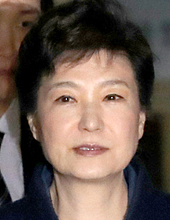 Former President Park Geun-hye will make an appearance in the courtroom tomorrow in the first hearing for her bribery and abuse of power trial.

The hearing will take place at the Seoul Central District Court at 10 a.m., and the former president, impeached in December and removed from office in March, will be tried on 18 charges. Park was accused of having received or been promised 59.2 billion won ($52.9 million) in bribes from conglomerates, including Samsung and Lotte groups.

Two preliminary hearings have already taken place for the trial, but Park did not attend the sessions. She will, however, make her first appearance before the public in 53 days since her detention, as it is mandatory for the accused to be present at an opening hearing.

Last week, the court received applications for the public audience. Of the 125 seats in the gallery, 68 were offered to the public and 525 applied.

The court said Monday it will allow the press to take photos and broadcast the hearing’s early minutes, until the judges enter the room and declare the opening of the session.

Park will be the third former president to face the public as an accused in a courtroom. In 1996, former Presidents Chun Doo Hwan and Roh Tae-woo attended their trial next to each other for their roles in the 1979 military coup and corruption charges. At the time, the court made a rare move to allow the press to take photos for the first 90 seconds of the hearing, taking into account the historic importance of the case.

It remains to be seen if the court will merge Park’s bribery trial with the case of Choi, as their charges of demanding and receiving bribes from Samsung in return for Park’s influence in resolving pending issues concerning the conglomerate largely overlap. Although the court said during the preliminary hearing last week that it will merge the two cases in order to avoid summoning the same witnesses twice, Park’s lawyers opposed the move. The court said it will make a decision tomorrow.

The independent counsel said it wants to question Park about her three exclusive meetings with Lee to confirm the nature of the bribery. It is yet to be decided if Park will be called as a witness.

Meanwhile, Park supporters said they will hold a rally tomorrow in front of the court to demand her immediate release. They also demanded that her impeachment must be voided.