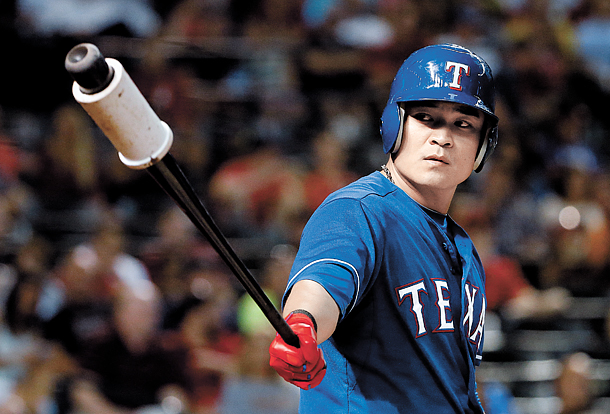 Despite the inconsistency in the Rangers’ lineup, Choo Shin-soo continues to play his best in every game. [JOONGANG PHOTO]

During the game against the San Diego Padres at Petco Park on May 9, the Texas Rangers included Choo Shin-soo in the starting lineup as their eighth hitter and right fielder. Since the Rangers’ away game against the Padres was a National League game, where the designated hitters are not used, there was a possibility for Choo to not appear in the game. Choo found out about his position right before the game, when he saw the line-up sheet.

“I’m not too sure why I went into the defense,” Choo said.

Prior to the start of the season, Jeff Banister, manager of the Rangers, mentioned that he will be using Choo more as a designated hitter. Since Choo was named in the disabled list four times during the 2016 season, it was translated that Choo had to take better care of himself to prevent him from injuries this season.

For the majority of the games in April, Choo was appointed as the Rangers’ designated hitter. But on offense, his role is uncertain. Throughout the month, he was somewhere from seventh to ninth in the Rangers’ batting order. Looking at Choo’s On Base Percentage (OBP), 0.381, it didn’t seem like the right decision to put him towards the end of the batting order.

By doing so, Banister hoped to have a smoother connection among the batters. But since the Rangers lack in offense, there’s a low percentage of Rangers scoring a run even when the seventh to ninth batters get on base.

Banister, who has entered his third year as the Rangers’ manager, is working through a lineup change. After losing the Rangers’ main players due to an injury, Prince Fielder and Adrian Beltre, Banister reduced the role of veteran players like Choo and Mike Napoli. However, since the younger players are developing slowly, Banister and the Rangers are still struggling to figure out their lineup.

Despite the struggle, Choo continued to perform. During the game on May 9, Choo hit a solo home run in the seventh and in the next two games, on May 10 and 11, Choo continued to get on base three to four times. The Rangers won ten consecutive games from May 10 and are now ranked second in American League West as of Tuesday.

It took a long time for Choo to get where he is. Choo left to the United States in 2001, playing four seasons in the minor league. Then in 2005, he made his major league debut with the Seattle Mariners as a right fielder. But shortly after, he got relegated to the minor league again and got traded to the Cleveland Indians, where he played seven seasons.

When Choo joined the Rangers in 2014, he struggled from an injury, but in his second season, he excelled, producing 22 home runs. Recently, he achieved his 150th career home run in the major league. Though he is a veteran player on the team, Choo still arrives at the stadium first among his teammates.

“Now, I know about the pitchers so there’s not much that I need to analyze,” Choo said. “But since I don’t know which position I’ll be playing in, I always prepare each game thinking that I’ll be playing on defense.”