Son comes back home after 7-1 over Hull City

Son comes back home after 7-1 over Hull City 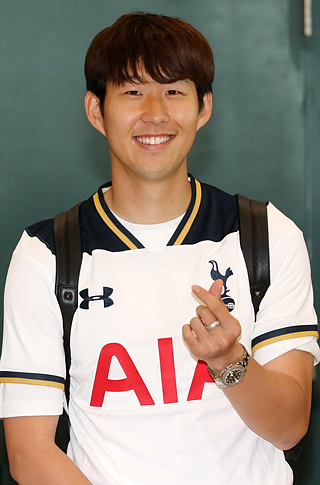 Son Heung-min of Tottenham Hotspur after arriving at Incheon International Airport on Tuesday. Son will join the national team practice on Monday in Paju, Gyeonggi. [YONHAP]

After concluding its 2016-17 Premier League season with a 7-1 win against Hull City AFC on Sunday, Son Heung-min of Tottenham Hotspur returned to Korea on Tuesday.

“I want to give myself a score of 70 this season,” Son said at the Incheon International Airport. “A perfect score of 100 would be for a player like Lionel Messi or Cristiano Ronaldo.”

Son returned to Korea with his Hotspur teammates, Kyle Walker, Kevin Wimmer and Ben Davies for a corporate event. More than one hundred fans came out to the airport to welcome Son, who had the best season of his football career. He set multiple records, and exceeded Cha Bum-keun’s single season scoring record among Korean players, at 19 goals, in the European League and became the first Asian football player to be named the player of the month twice in a single season.

“I learned a lot throughout the season and I am very thankful,” Son said at the airport.

This season, Son surpassed the legend and made history in Korean football. Throughout his 2016-17 season, Son scored a total of 21 goals. He scored 14 goals in his Premier League matches, six goals in the FA Cup and one goal in the UEFA Champions league matches. For the first time in 31 years, Cha’s record has been broken.

“Cha Bum-keun is incomparable,” Son said. “I’ve never seen Cha during his time as a player but I am aware of how great of a player he was. Cha played when football wasn’t very familiar in Korea. That said, in the future, my record will be broken too.”

Aside from the number of goals scored, Son also had the honor of receiving Premier League’s player of the month award twice. When Son won the player of the month in September, he was the first Asian football player to do so but by receiving another one in April, he exceeded his own record. With his outstanding performance, Hotspur finished second in the Premier League for the first time in 54 years.

“Since I am not yet perfect, I’ll work harder to move forward,” Son said.

When asked about his goal for next season, Son said, “I showed a lot of positives but I have a sense of regret in missing our chance of winning,” Son said. “Personally, I want to raise up that Premier League trophy.”

Now that Son is done with Hotspurs’ season, he will now be running around the field representing Korea. He will be joining the practice on Monday at National Football Center in Paju, Gyoenggi and will start training with the other members in preparation for its final World Cup qualification match against Qatar scheduled to be played on June 13.

Currently, Korea is ranked second in Group A with 13 points, four points behind the leader, Iran. Though only the top two teams in each group qualify to the World Cup, Korea is not yet secure as second place, having only a one point lead against Uzbekistan, third ranked team.

Since there are only three games remaining in group qualification round, Korea’s upcoming match against Qatar is considered very important. If Korea maintains second in the group, the team will be making their ninth consecutive World Cup appearance.

“Though I’m in my off-season,” Son said, “I’ll maintain a good condition and play well.”