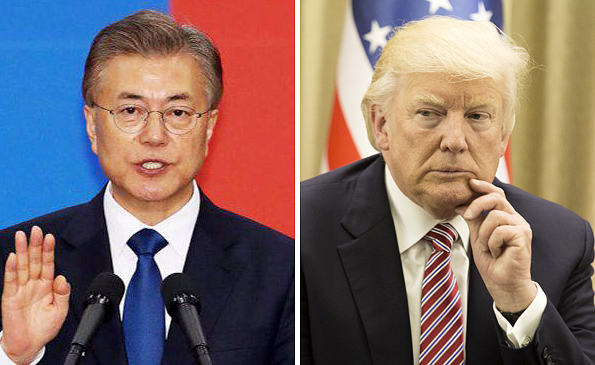 The Korea-U.S. summit is scheduled for June, and if it goes well, major diplomatic issues could be resolved. The public calls for an early meeting, and President Moon Jae-in is meeting the U.S. president earlier than his predecessors. However, there are a few concerns about the early meeting.

First of all, U.S. President Donald Trump is an eccentric leader. He has met with a number of foreign leaders, and while some ended on a good note, many turned out to be disastrous. His phone conversation with Australian Prime Minister Malcolm Turnbull eight days after the inauguration was one of them. Trump got angry when Turnbull told him that 1,200 refugees in Australia would be sent to the U.S. as agreed with the previous administration. He shouted that it was the “worst deal ever” and ended the call in 25 minutes, less than halfway through a conversation scheduled for one hour.

The summit meeting with German Chancellor Angela Merkel didn’t go well either. After the awkward meeting, a reporter asked them to hold hands. While Merkel suggested shaking hands, Trump pouted and pretended not to hear her. Right before the meeting, Trump handed Merkel a $300 billion NATO bill. It is uncertain how Trump would act when he meets Moon.

Second, there is not enough time for preparation. The summit between Kim Dae-jung and George W. Bush in 2001 is considered to be the worst in history, and it was also rushed. President Kim was anxious to advocate the Sunshine Policy, and the meeting with newly inaugurated Bush didn’t go as he hoped. When Kim proposed assistance to North Korea, Bush rejected the idea of helping a dictator who let his people die of starvation.

Third, the chemistry between Moon and Trump is a concern. No liberal South Korean leader has gotten along with a Republican U.S. president. President Kim and President Roh Moo-hyun had lukewarm relationships with George Bush, even when President Roh said, “I may have been in a political prisoner camp if the United States hadn’t helped the South during the Korean War.”

Then, how should the meeting be planned? The best leadership meeting for Korea was the 1998 Korea-Japan summit. Through the summit, the two countries reached the future-oriented Korea-Japan Partnership Declaration. The Korean leader at the time was President Kim Dae-jung, who had the worst meeting with Bush.

What was the difference? The key was through preparation. The foreign ministry prepared for eight months for the meeting, a process that generally takes three to four months. While we have less than one month until the meeting between Moon and Trump, Seoul needs to thoroughly and carefully prepare.

We also need to keep in mind that personal character and preferences could be critical. U.S. President George W. Bush was fond of President Lee Myung-bak because of prayer. Bush is a devout Christian and said that he was impressed by Lee saying grace before dinner.

What made Trump and Japanese Prime Minister Shinzo Abe’s meeting successful was golf. Trump is known to enjoy golf very much. Abe brought Trump a gift of a $3,755 gold driver and played 27 holes. Not surprisingly, they got along.

Trump is known to evaluate people through business experience and care about personal relationships. He is the polar opposite of Barack Obama, who treated everyone with dignity and respect. Unfortunately, Moon does not enjoy golf and cannot win Trump’s heart with prayer, as Trump is a Christian but not very devout.

But we should not throw our hands up in despair. The foreign ministry needs to find kind of emotional common link between the two leaders and cleverly exploit it. Like it or not, Koreans often make comparisons to how Japan does things. The government needs to remember that Moon’s meeting — and its success or failure — will be compared to Abe’s success.