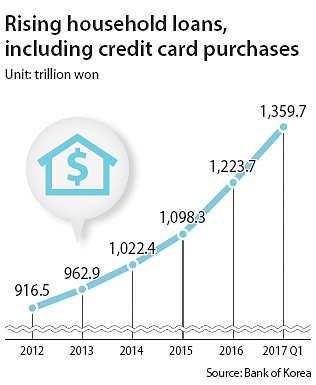 Household debt, including credit card purchases, has broken records again, although the speed at which it has been growing has been curbed as a result of government efforts.

Its enormous size is still considered to impose a huge risk, however, particularly at a time when the central bank is under pressure to normalize its loose monetary policy.

The bigger concern was that the loans from nonbanking financial companies between January and March, including savings banks, insurance firms and cooperatives, which charge higher interest rates, saw more aggressive growth than bank loans.

Loans from banks added 1.1 trillion won in the first quarter to 618.5 trillion won while debt from nonbanking financial institutions grew by 7.4 trillion won during the same period to 298.6 trillion won.

“Mortgages overall have shrunk [due to stricter loan requirements as part of the government’s risk management] but they were passed over to the nonbanking financial institution,” said Moon So-sang, head of the monetary and financial statistics team at the BOK.

Borrowers at those financial institutions usually have lower incomes and credit ratings. This translates to a riskier loan than bank borrowers.

Currently, the market speculates that the BOK will hold interest rates at the historic low of 1.25 percent.

The key rate has been at that level since the BOK, in hopes of contributing to the nation’s economic recovery, shaved 0.25 percentage points last June.

In a recent survey by the Korea Financial Investment Association on 200 bond traders, all betted on the BOK freezing the interest rate this month.

“Continuing corporate restructuring of weakened industries and the continuing slow growth of the economy as well as weak consumer sentiment are raising outlook of a cut in the interest rate,” said an official with the investment association.

“[But] the possibility of an interest hike in the U.S. and expectations of an economic recovery resulting from the new government’s expansionary fiscal policy is also easing the need of an interest cut.”

BOK Governor Lee Ju-yeol is under immense pressure to decide the direction of the monetary policy rate as the U.S. Federal Reserve is expected to speed up its raising of interest rates.

However, the market, which previous speculated another hike in July and at the end of the year, has moved the date up to one in June and another in September, as various economic indicators for the U.S. economy, including the jobs reports, have been improving.

But raising Korea’s own interest rates is expected to impose heavy burden on average households especially at its current record-breaking level. When raising the interest rates, households feeling the burden could start tightening their spending, which could throw back the economic recovery that recently has been gaining momentum.

The Financial Services Commission, in a report released on Tuesday, raised similar concerns.

While it noted that the debt growth has been improving it noted the risks over the size of debt and raised the need for managing household debt.