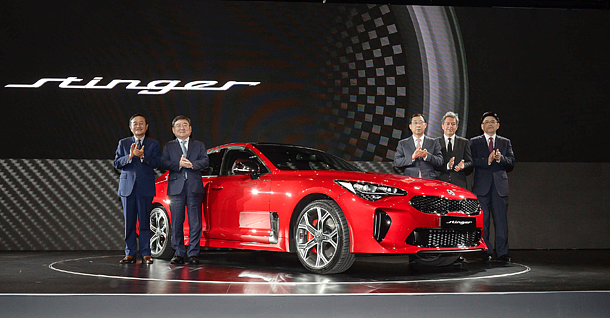 Kia Motors executives, including the vice chairman Lee Hyoung-keun, second from left, pose with the Stinger at a press conference in Seoul on Tuesday. The Stinger is the first premium sports sedan by the carmaker. [KIA MOTORS]

Kia Motors, the second largest carmaker in Korea, officially released the first vehicle in its premium lineup - the Stinger - on Tuesday.

Kia’s first premium sports sedan will compete against sedans made by German carmakers BMW and Audi in Korea, which is considered a tall order for the more humble brand.

The Stinger is based on the concept of the gran turismo, or grand tourer, a high-performing luxury car capable of high speed and long distance driving that the carmaker previewed at the Frankfurt Motor Show in 2011. It comes in three different models: 3.3-liter twin-turbo, 2.0-liter turbo and 2.2-diesel. The 3.3-liter twin-turbo can generate 370 horsepower and 52.0 kilogram-meters (376 pound-feet) of torque and can go from 0 to 100 kilometers in just 4.9 seconds. Its maximum speed is 270 kilometers per hour, according to the carmaker during a press conference in Seoul on Tuesday.

Lee Hyoung-keun, vice chairman of the automotive company, said, “We did test runs in harsh environments [such as the Nurburgring, Germany, also known as The Green Hell] to create a car with quality superior to the competitors.”

Gregory Guillaume, chief designer at the Kia Europe Design Center, said the company tried to deliver a “modern interpretation of what gran turismo should be.” He explained that the long tradition of gran turismo is about travelling as well as convenience while “never forgetting elegance and style.”

“It was essentially for us to [ensure] enjoyable long-distance driving,” said the designer. “[We wanted to emphasize] athleticism in the design rather than aggression.”

Still, skeptics question whether the new vehicle will be considered luxurious or prestigious enough to Koreans.

“The main target market for the Stinger [wealthy professionals such as lawyers, doctors and executives] may not care about a 10-million-won price difference given their social status and wealth,” said an industry insider who requested anonymity. “Given the choice, many would still prefer a foreign luxury brand [such as BMW, Mercedes Benz and Audi].”