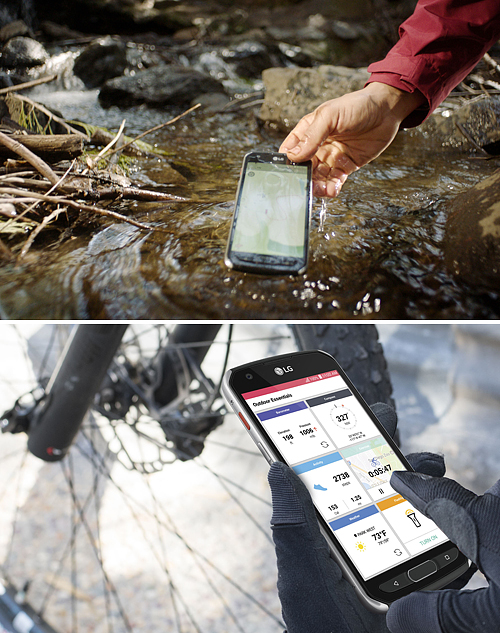 Top: LG X venture is water-resistant and can be immersed up to 1.5 meters (4.9 feet) deep for 30 minutes. Bottom: Glove Mode allows users to control the phone without removing their gloves. [LG ELECTRONICS]

LG Electronics will unveil a smartphone titled LG X venture worldwide, targeting outdoor lovers who need durable gadgets when they are out on activities such as hiking and camping.

The smartphone maker said Tuesday the global launch of the “ruggedized” X venture, which can withstand extreme environments. Launched in North America on May 26, the phone will be released in South America and Africa in the following weeks.

“Consumers with active lifestyles want devices that they don’t need to coddle or worry about when they’re on the go,” said Cho Juno, president of LG Electronics’ mobile phone division. “But the LG X venture isn’t a ruggedized phone that makes sacrifices. Its long list of features, long battery life and excellent photo capabilities makes it the ideal companion for customers who wants a phone that works anytime, anywhere.”

The company says the new phone is “heavy-duty” and has passed 14 U.S. military-standards tests. Some of the tests include resistance to thermal shock and humidity. It also can be exposed to temperatures ranging from negative 20 degrees Celsius (negative 4 degrees Fahrenheit) to 60 degrees Celsius. The company said while affordably priced around $300, its durability is equivalent to that of its premium phone G6.

The phone has a shatter-resistant display and can be immersed in up to 1.5 meters of water for 30 minutes.

Given some users may be exposed to extremely cold weather, the QuickButton on the side of the phone enables them to control key features without taking off their gloves.

The X venture, which runs Android 7.0 Nougat has with a 120-degree wide angle front camera, which allows users to take photos of themselves with a wide background without monopods. The 4,100mAh large-cap battery can be charged up to 50 percent in less than an hour.

In terms of software, X venture comes with the Outdoor Essentials application. The app provides information while out on the go, such as atmospheric pressure, a compass, weather report and flashlight.

LG X venture will compete against Samsung Electronics’ Galaxy S8 Active, also made for outdoor activities. Samsung’s phone is set to be launched in the United States next month.

The X venture comes as its smartphone division struggles to stay afloat. LG Electronics’ first-quarter profit this year jumped more than 80 percent year on year, thanks to the home appliance and air solution division. But the smartphone division had 200 million won ($178,000) in losses.