Upgrading workers is not easy

Upgrading workers is not easy 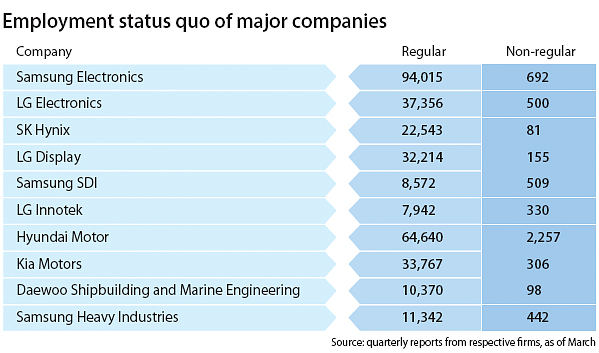 Corporate Korea is scrambling to follow the Moon Jae-in administration’s effort to improve the status of contract workers, but they’re finding it’s not easy.

SK Broadband, the internet and TV service arm of top telecom operator SK Telecom, took the lead Monday among conglomerates to convert 5,200 non-salaried workers at its subcontractors into staff jobs. It established a subsidiary to formally hire them. The wholly-owned subsidiary with 42 billion won ($37.4 million) in capital will start up next month.

The Moon administration’s “zero non-regular worker policy” is a particular challenge to the banking industry, which is notorious for relying on contract workers and subcontractors.

A week after Citibank Korea and the state-run Industrial Bank of Korea promised to do something, Shinhan Bank, which has the second-largest percentage of non-salaried workers among the top four commercial banks in Korea, vowed on Monday to put on staff some 70 out of 170 contract workers by the end of this year.

A union representing non-regular workers at SK Broadband welcomed management’s decision, dubbing it a “meaningful event that benefits customers, the company and workers.”

“With the current indirect management system, it’s hard to proceed with the customer-centered services encouraged by the mother company,” said Lee Hyung-hee, CEO of SK Broadband, in a statement on Monday. “That’s why we have reached the conclusion to manage subcontracted employees directly.”

But not everyone was happy about the move. Managers at the subcontracting companies are on the verge of losing their jobs. As soon as SK Broadband made its announcement, some 100 top managers at subcontractors protested, claiming the company was “unilaterally suspending renewal of contracts and stealing laborers belonging to subcontractors, which violates the fair trade act.” They threatened to sue SK Broadband.

The company’s management was forced to say it would come up with even more measures, such as hiring the subcontractor managers for the new subsidiary.

It’s been a long time since the problem of contract workers and subcontractors dogged the telecom and cable industries. Service employees who visit households or offices to install or fix devices for telecom companies may wear SK Broadband uniforms and look as if they work for the SK Telecom subsidiary. They are actually hired by the so-called home centers, 103 subcontractors that have contracts with SK Broadband extended every year. Subcontractors with bad performance don’t get renewed and their employees suffer chronic stress from job insecurity.

Labor experts advise private companies to take it slow in complying with the new government’s agenda.

“The employment issue is directly linked to corporate profitability, competitiveness and labor costs,” said Park Ji-soon, a professor at Korea University’s law school. “Recklessly converting non-regular workers into regular workers without proper countermeasures could lead to side effects such as restructuring and job reductions.”

The salary and benefit gaps between those who are taken on staff now and existing staffers may result in a discrimination issue and SK Broadband’s decision to establish a subsidiary could help tackle potential problems.

How companies handle the additional costs of more salaried workers is another issue. Professor Park pointed out that each company has a limited budget assigned to labor but if the number of workers enjoying equal benefits increases, the side effects would ultimately boomerang on workers.