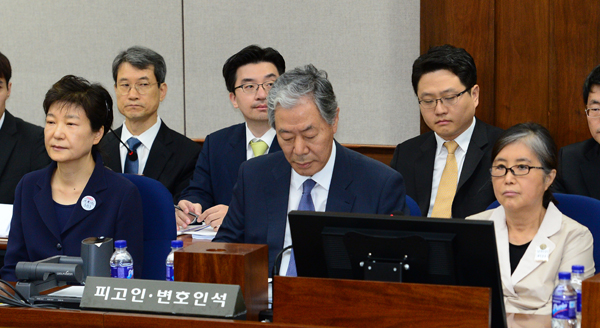 Former President Park Geun-hye, far left, waits at the Seoul Central District Court on Monday for the first hearing for her bribery and abuse of power trial. Her confidante Choi Soon-sil is seated far right. It is Park’s first public appearance since she was put into custody on March 31. [YONHAP]

A Seoul court on Tuesday began the historic trial of former President Park Geun-hye over a string of corruption allegations involving her longtime friend and former aides.

Park, handcuffed and in a navy suit, appeared at the Seoul Central District Court escorted by correctional officials. It was her first public appearance since she was put into custody on March 31.

The former president, ousted by the March 10 Constitutional Court ruling, was indicted last month for bribery, abuse of power, coercion and leaks of government secrets in 18 suspected crimes.

The first hearing, which began at 10 a.m., was presided over by a three-justice panel, led by Judge Kim Se-yun who is also in charge of the case of Choi Soon-sil, Park's friend at the center of the influence-peddling scandal that removed the former leader from office.'

One of the gravest allegations Park faces is that she took or solicited bribes worth some 59.2 billion won (US$52 million) from three conglomerates -- Samsung, Lotte and SK -- for herself or her friend Choi. If convicted, she could face a prison term of 10 years to life.

Choi and Lotte Group Chairman Shin Dong-bin also appeared at the court to stand trial along with the former president. The trial of Samsung's de facto leader Lee Jae-yong is already underway after he was indicted in February.

Other key issues include creating and managing a blacklist of artists deemed critical of the government and pressuring local companies to donate billions of won to two dubious foundations allegedly controlled by Choi.

During two preparatory sessions held at the court, Park's attorneys denied all charges leveled against her. She was not present at the sessions as they were not mandatory.

Unlike preliminary sessions, suspects are required to attend formal hearings.

Park is the country's third former president to stand trial over corruption allegations after Chun Doo-hwan and Roh Tae-woo who were convicted in 1996-97.

The court is expected to deliver the ruling before the period of Park's detention expires six months after the indictment, which took place on April 17.

Her second hearing is scheduled for Thursday. The court plans to hold hearings every two to three times a week to review evidence and question witnesses.'