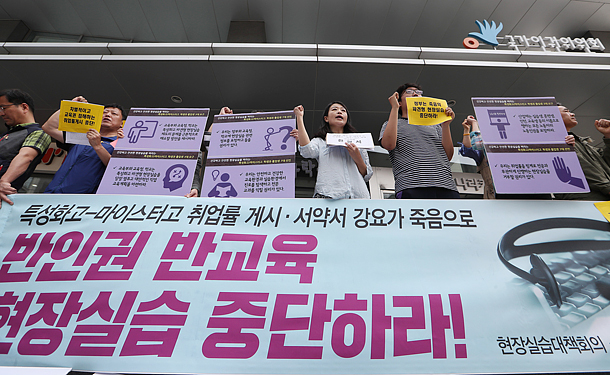 Members of an association of 125 civic groups hold a press conference in front of the National Human Rights Commission of Korea in central Seoul on Tuesday after it petitioned the commission to investigate cases of human rights infringement by the on-site job training programs of vocational high schools. [YONHAP]

An association of 125 civic groups petitioned the National Human Rights Commission of Korea on Tuesday to investigate cases of human rights violations at vocational high schools after a student of one such school killed herself earlier this year.

“I couldn’t make enough calls today to meet my quota,” was the last text message an 18-year-old student of a vocational school in Jeonju, South Jeolla, sent her father before she killed herself. She was found drowned in a reservoir in Jeonju on Jan. 23. Her last text message to a friend was about killing herself.

The student, surnamed Hong, was working at a call center subcontracted with LG U+.

Hong often texted her father about not being able to get off work on time because she needed to make additional calls. Her friends have told media outlets that she would often “cry for hours” after she was allegedly verbally abused by customers.

The company denied having overworked the student.

“The National Human Rights Commission of Korea must look into cases of youth labor rights violations,” the association of 125 civic groups said in its petition to the commission on Tuesday. “Many of these vocational high schools are turning into some type of agencies that hand over young laborers to the job market without ensuring their rights are protected.”

Vocational high schools have recently received public attention for the rising employment rate among their graduates. The employment rate of vocational school graduates rose for the seventh consecutive year, the Ministry of Education said, from 16.7 percent in 2009 to 47.2 percent last year. The government’s target rate by 2022 is 65 percent.

For the past three weeks, the 125 civic groups received reports of human rights violations of students at vocational high schools and meister high schools, or state-run high schools introduced in 2009 to train students with technologies of some of the fastest emerging sectors, including semiconductors and robots.

Some of these cases include regular posting of the students’ employment results on a board on campus with full disclosure of their names, and even an agreement signed with the students to “not hold the school responsible for possible accidents during on-site training.”

“Some students after signing such an agreement cannot hold the school accountable for connecting them with on-site training posts that do not protect their rights,” the association said in its statement. “Many of these students also told us that they could not report cases of rights violations for fear that they may jeopardize their job prospects.”

The association further asked the commission to consider shutting down the on-site training programs at vocational high schools until further institutions to protect the students’ rights are established.

A group of graduates of vocational high schools started a petition online since Hong’s death.

“We the students and graduates of vocational high schools have the right to say no to on-site training jobs that are unrelated to our majors and are only given to us to help boost the schools’ graduates’ employment rate,” the petition said. “We also have the right to choose among various on-site training jobs and to quit a job if it’s too dangerous for our health and to return to school without shame or stigma.”

The petition demands three factors from the Ministry of Education, schools and companies.

“We demand the Education Ministry, education offices and schools to solve these human rights violations in the on-site training jobs connected to vocational high schools and to stop forcibly sending students to unhealthy postings,” it said. “The companies conducting on-site job training programs for students must protect the students’ labor rights.”