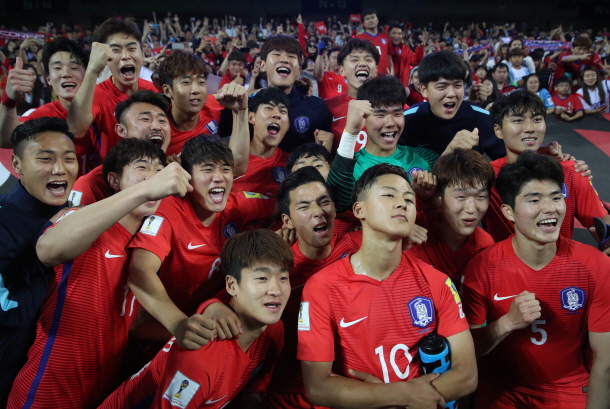 The Korean national football team celebrates their 2-1 victory over Argentina at the FIFA U-20 World Cup at Jeonju World Cup Stadium in North Jeolla on Tuesday. [YONHAP]

Korea became the first team to clinch a knockout berth at the 2017 FIFA U-20 World Cup with a 2-1 win over Argentina Tuesday.

Two FC Barcelona prospects, Lee Seung-woo and Paik Seung-ho, scored a goal apiece for the second straight game at Jeonju World Cup Stadium in Jeonju, some 240 kilometers south of Seoul, as Korea improved to six points to stand atop Group A before more than 27,000 fans.

Argentina got one back early in the second half but couldn't convert their superior ball possession into more goals.

Regardless of their result in the group finale against England on Friday, Korea will advance to the round of 16 as one of the top two seeds. Korea beat Guinea 3-0 to open the competition Saturday.

There are six groups of four in action, and the top two teams, plus four best third-placed teams, will reach the knockout stage.

Argentina are still pointless after two straight losses to start the tournament. England were held to a 1-1 draw by Guinea earlier Tuesday and are in second place behind Korea with four points.'
Korea came out with a back three system, trying to contain the skillful Argentines, but the South Americans still spent the early portion of the match in the offensive zone.

The Argentines were quicker to the ball and won individual battles, while the Koreans struggled to make decent passes into the opposing zone.

And with his team's passing game off, Lee Seung-woo took matters into his own hands and put Korea on the board with a spectacular goal in the 18th.

Lee, a midfielder for Barca's Juvenil A team, secured the ball at the half line and started charging down the left wing, with five opponents chasing him. Lee then made a deft move to his left to create more space, and chipped the ball over the charging goalkeeper Franco Petroli.

Paik, an FC Barcelona B team member, doubled the lead by converting a penalty in the 42nd. Forward Cho Young-wook drew the foul in a collision with Petroli in their battle for the ball inside the box.

Both players went down in pain, though Petroli looked worse for the wear after an awkward landing. He stayed in the game but couldn't stop Paik's spot kick.

Argentina made two substitutions to start the second half, as coach Claudio Ubeda tried to shake things up and spark his squad.

The move paid immediate dividends as one of the subs, forward Marcelo Torres, cut the deficit in the 50th.

The swift attacker slipped behind multiple defenders for a one-on-one chance on Song Bum-keun, and easily beat the Korean goalkeeper with a low shot.

It was also Argentina's first goal of the tournament.'
Argentina kept the pressure on, with Ezequiel Ponce firing a hard shot right at Song in the 61st. At the other end, Lee Seung-mo launched one from long distance, forcing a diving save by Petroli.

Ponce was at it again in the 75th but saw his header bounce over the crossbar. Tomas Conechny then sent a curling shot toward the net in the 84th, and Song kept it a 2-1 game with a diving stop.

Korea were on their heels for the final 20 or so minutes, and survived a particularly nervy five-minute extra time.

Winning coach Shin Tae-yong said he was "thrilled and nervous" at the same time, as his young charge held on for dear life.

"I didn't expect to have a really tough match, but Argentina were Argentina today," Shin said. "Our players really made sacrifices and did well. Argentina tried to sway the match in their favor whenever they had the ball, but today, we showed our strength to defend the lead."
Argentina had 19 shot attempts, compared to seven for Korea, and only eight of those were on target. Korea put four shots on target.

Korea will win Group A if they beat England or have a draw with them. In that case, Korea will face a third-place qualifier from Group C, D or E in the round of 16 on May 31 in Jeonju.

If Korea lose to England, they will finish second in the group. Korea will then take on Group C's runner-up in the round of 16 on May 30 in Cheonan, 90 kilometers south of Seoul.

Zambia and Iran have each won their first matches in Group C, by beating Portugal and Costa Rica, respectively.

Korea didn't qualify for the previous U-20 World Cup in 2015. They reached the quarterfinals in 2013. Korea's best performance came in 1983 in Mexico, where they reached the semifinals.'