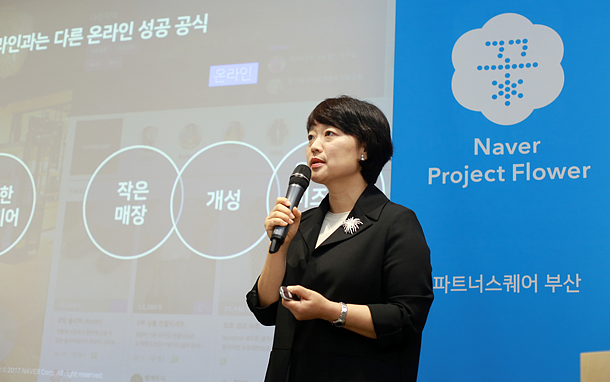 The tech giant’s first such support center was established in Yeoksam-dong, southern Seoul, in 2013. The goal of these centers is to help small-enterprise owners and content creators like web comic artists grow their business through Naver’s online platforms. The tech company believes clients are not fully benefitting from its services.

“There are 4.79 million self-employed small-business operators in the country according to Statistics Korea, but less than half of them are using Naver’s online services and only 6 percent of them are doing business based on Naver’s online commerce platform,” said Han Seong-sook, CEO of Naver. “We want to create a formula for online success that is distinct from success stories offline.”

Busan was chosen as the location of Naver’s second center because of the region’s high demand for business training programs and its competitiveness in fashion. When Naver held a training program for small-business operators outside the Seoul area last year, more than 45 percent of the applicants were from the Gyeongsang area, of which Busan is a part, according to the company, suggesting higher demand for training programs here.

Small-business owners in Gyeongsang also appeared to be especially competitive on Naver’s Style Window, an online shopping platform for clothing. The number of shops registered on the platform in Gyeongsang was similar to Seoul, but businesses in Gyeongsang made 45 percent more revenue, Naver said. Last year, there was a clothing shop in Busan that managed to quadruple earnings by going online through Naver’s platform.

During Wednesday’s opening event, Han also commented on the net neutrality issue that recently arose between Facebook and SK Broadband. SK Broadband has accused Facebook of not paying its fair share for the heavy amount of traffic going to the social media platform. While local tech companies like Naver and Kakao have been paying network fees to telecommunications providers, foreign operators like Google and YouTube have not while Facebook has only paid KT.

“Naver still pays network fees, and we can manage the fees in the future as well,” Han said. “However, the government needs to consider whether content-providing start-ups can also pay such fees and solve the problem in a way that is efficient for all parties in the internet business sector.”