‘I did my best to clear our party of factional fighting’

‘I did my best to clear our party of factional fighting’ 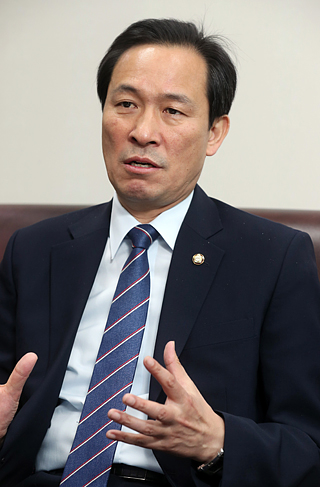 Woo Sang-ho has been serving as Democratic Party floor leader for the past year and working on the front lines to achieve regime change for the first time in a decade, while impeaching former president Park Geun-hye. He is one of the key leaders of the so-called 86 Group, which refers to those who were born in 1960s and entered college in the 1980s.
He has been working to balance the Democratic Party by taking politically neutral stances and cooperating with other parties. He also changed many people’s views toward 86 Group as those who led anti-government rallies in 1980s. The JoongAng Ilbo met with Woo, who stepped down as the floor leader, at his office at the National Assembly on May 17.
Below is the edited excerpt of the interview.

Q. It appears that politicians from the 86 Group are getting significant roles in the Moon Jae-in administration.

A. When I was running for the floor leader post last May, I set a goal to get rid of the 86 Group’s image of getting elected as lawmakers by being on the side of former President Roh Moo-hyun when he was impeached by the National Assembly. I worked hard to have people think of us as stable politicians instead of as being incompetent. When Park Geun-hye’s nude image scandal happened, I asked the lawmaker who was responsible for the incident to make an apology right away. This is helping us become more influential in the political circle.

You have promised to break up 86 Group after the 2012 presidential election.

No one was taking responsibility after we lost the election. Even pro-Moon Jae-in’s people were not. So we decided to break up the group to take responsibility at that time. Back then, about 20 lawmakers of the group met once a month and issued statements when we found it necessary. But we stopped doing that since then.

Did you really have to go as far as breaking up the group?

I found it necessary to stop doing politics as a group or faction. In fact, there were various kinds of people in the group. There are people who don’t have any faction like me, while there are some people who are pro-Chung Sye-kyun and pro-Moon. This is why I think the decision to break up the group was well-made.

People from the 86 Group became the key political figures at the new administration.

Only Im Jong-seok became the chief of staff. Song Young-gil didn’t become a member of the cabinet as he is trying to become the party’s leader. One of the interesting things is the role that Im got. I thought the president would have Im become his senior secretary for political affairs, but instead he chose him as chief of staff. This shows how much trust Moon has in Im. Im is a guy who changed the most among members of the 86 Group. He has become the most flexible politician. Everyone dreams of revolution in their 20s, but no one does in their 50s.

It appears the Moon administration is more stable than Roh’s.

This is because of the power of experience. We have run the government a decade ago and experienced failures. Communicating with people is hard if you are not used to it. As the ruling party, it is very easy to work if the president does well without making mistakes.

The ruling party only has 120 seats at the National Assembly. How will you work with opposition parties?

We will respect opposition parties. Former President Park invited floor leaders from both ruling and opposition parties, including me, last year. We suggested 10 policy changes, but she didn’t make a single thing happen.

She was only talking about herself. I said the song “March for the Beloved” is just a song and asked her to just say people can sing this song. But she didn’t even accept that. The Moon administration shouldn’t follow the same route.

Senior secretary for political affairs and the ruling party should listen to opposition parties to have them have what we can give. Cooperation won’t happen if the opposition parties feel they have totally lost in negotiations. It was hard to cooperate during the three-party system and now it has become a five-party system. We haven’t done anything during sessions in January and February.

I think you might be considering have the People’s Party merge with yours.

I always thought that way, even before the election. We didn’t separate because we have different ideologies. We separated because of pro-Moon faction issues ahead of nominating key posts of the party and election candidates. There no longer are such issues. Floor leaders have been non-pro Moon recently since the breakup and the president is not picking pro-Moon people as cabinet members. There is no reason for the People’s Party’s to reject the merger.

The People’s Party worries about not being able to get candidate nominees for the general election once they merge.

Why would Moon play with nomination cards after his dream of being president has come true? The People’s Party needs to consider this issue more thoroughly. How can they not merge with us even though they are saying they might merge with Bareun Party?

It appears Moon will only pick people from the Democratic Party.

He never thought about working with people from other parties. I heard it from Im Jong-seok. Yoo Seong-min from the Bareun Party becoming a cabinet member is just speculation.

What about establishing a coalition government with opposition parties?

Not now. If we were to do it, we had to decide on it before the election. The only possible way to form a coalition government is to have parties merge.

There were conflicts within the party and many believe you did a good job settling it.

Our party’s images are divided and fighting between factions. As a floor leader, I prioritized being balanced. I wanted to make regime change through creating an image of an authorized party. I found out that lawmakers were not communicating with each other and only talked to people they were close with. That is why I visited pro-Moon, non-Moon faction, pro-Park Won-soon and pro-Ahn Hee-jung groups to deliver my views. After a couple months of such communications, general meetings became more peaceful.

Didn’t mainstream party members ask you to side with them?

Lawmakers are not stupid. They know if a floor leader makes a deal with a certain faction. Mainstream lawmakers asked for higher or more important posts but I gave seats fairly. There was no conflict due to that.

Your party was confused about the Thaad issue.

I am opposed to the idea. Kim Jong-in, then interim leader of the Democratic Party, argued that we shouldn’t damage the alliance between Korea and the United States. I said I agree with his point of view, but that we should remain vague instead of saying we agree with the deployment 100 percent. I invited 40 lawmakers who were opposed to the deployment and said we shouldn’t have included opposition to the deployment in our party’s official stance in order to become an respectable party. But I didn’t stop 20 lawmakers from going to Seongju to protest the deployment. I remained balanced between reality and ideology.

What is your party’s position towards Thaad after becoming the ruling party?

I don’t think there is a point to oppose to the idea since the missile defense system is already deployed. The conflict between Korea and China are based on emotion. China doesn’t like the fact that we decided to deploy it unilaterally.

What are the chances of withdrawing it?

If the Donald Trump administration asks us to pay some trillion won for the deployment, this will definitely become an issue. I don’t think we should decide now whether to get rid of Thaad. We need to first consider solving the North Korean nuclear weapon issue.