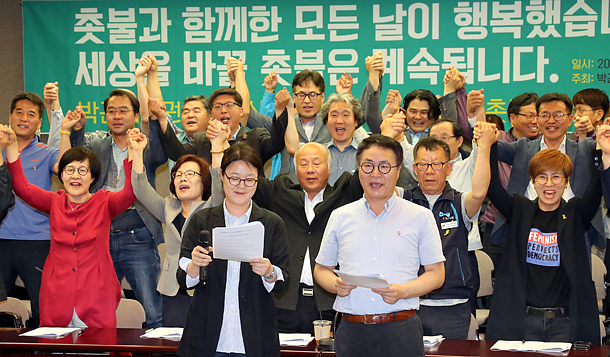 Members of the association of some 1,500 civic groups that organized the weekly anti-Park Geun-hye candlelight vigils from October to last month are cheering the dissolution of the association announced at a press conference on Wednesday in central Seoul. [YONHAP]

The organizers of the anti-Park Geun-hye rallies announced the official dissolution of their association, made up of some 1,500 civic groups, on Wednesday, officially bringing an end to the weekly candlelight vigils held from last October to call for the ouster of the former president embroiled in a corruption scandal.

“We announce the end to the movement because it has done its work in ousting the Park Geun-hye administration,” the organizers said in a statement Wednesday. “The people who have withstood the cold and the rain to light the candles and stand together for the cause are the owners of this movement.”

After reports on the unprecedented power abuse scandal of the president and her inner circle surfaced, the candlelight vigil began on Oct. 29, 2016, with some 30,000 participants at the Gwanghwamun Square. The crowd grew every Saturday, peaking at some 2.32 million throughout the country on December 3.

They called for a swift ruling from the Constitutional Court to remove Park from office for the Sewol tragedy, allowing an inner circle to run her government, blacklisting entertainers they disapproved of and strong-arming millions of dollars in donations from business groups in return for government favors.

The National Assembly impeached Park on Dec. 9 and the Constitutional Court ruled to remove Park from office on March 10. Until this point, an accumulated number of 17 million people had participated in the weekly rallies, according to the organizers. The 23rd and last candlelight vigil was held at Gwanghwamun Square, central Seoul, on April 29 to make demands to the presidential candidates.

The organizers in the press conference on Wednesday emphasized the impact of the people’s movement.

“The people were enraged over the scandal, and while the politicians and the National Assembly were hesitating over what action to take, we took to the streets to make sure our voices are heard,” the organizers said in their statement. “The rallies were the evidence of democracy in this country and at the same time a festival of the people. The peaceful movement of the people has stopped the violence of the authorities.

“And the movement will not stop,” it added. “Every one of us will continue to root out corruption in society, wherever we belong.”