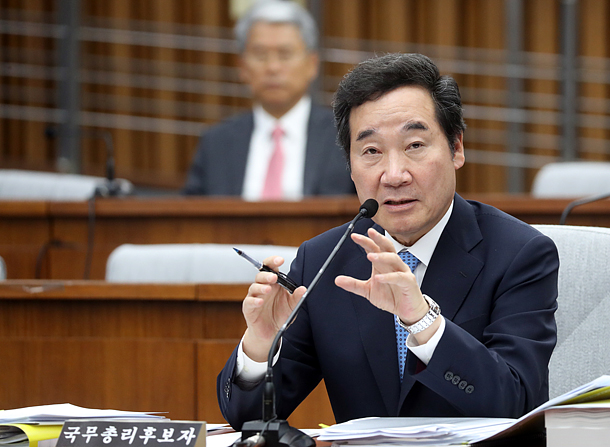 Prime Minister-nominee Lee Nak-yon speaks at a confirmation hearing in the National Assembly on Wednesday. [YONHAP]

Prime Minister-nominee Lee Nak-yon on Wednesday admitted that his wife used a fake residential address in the past to be assigned to a better position as a teacher and issued an apology.

In a confirmation hearing at the National Assembly, Lee faced intense grilling from opposition lawmakers about ethical issues involving his family, including alleged draft-dodging by his son and his wife’s use of a fake address.

Those two issues have torpedoed nominees for top government positions in the past. The Korean public is particularly sensitive about elite families finding ways to get their children out of mandatory military service and the use of fake residential addresses for real estate speculation or to get their kids into better schools.

The former South Jeolla governor was nominated by President Moon Jae-in on May 10. The Democratic Party (DP), which played offense in confirmation hearings for the past nine years of conservative administrations, took on the role of defense while opposition lawmakers attacked Lee.

Rep. Lee Tae-kyu of the People’s Party asked Lee if his wife actually lived in Nonhyeon-dong in Gangnam District, southern Seoul, from March to December 1989, and Lee replied, “She did not.”

Lee’s wife changed her address from Pyeongchang-dong in Seongbuk District, northern Seoul, to Nonhyeon-dong in March 1989 and then changed it back in December 1989, fueling suspicions that it was to send their son to a more prestigious school in Gangnam.

But according to Lee, his wife was a high school art teacher at the time and she briefly used a false address in order to be assigned to a post in Gangnam. She, however, quickly retracted the action and did not benefit from it, Lee said.

“She said she did so because the working conditions were more comfortable there, and I belatedly confronted her about the wrongdoing,” Lee said. “I feel terrible. I regret that I could not stop her. A wrongdoing was committed for an extremely foolish thought.”

Rep. Park Myung-jae of the Liberty Korea Party(LKP) pointed out that President Moon made a campaign promise that he would not allow five types of corruption when making appointments for senior posts in his government. That pledge was already broken, he said.

Moon promised to not appoint any candidate with a record of draft-dodging, real estate speculation, tax evasion, fake address registration or plagiarism. The practice of registering a false address is a crime punishable by up to three years in prison or a fine of up to 10 million won ($8,898).

Kang Kyung-wha, nominated by Moon as the foreign minister, also has a record of using a fake address, the Blue House earlier said.

During the Kim Dae-jung administration, two nominees for the prime minister post were rejected by the National Assembly in sequence due to histories of using fake addresses.

The LKP also raised questions about Lee’s son’s military service. A medical examination in 2001 ruled that the son was fit to serve, but he was later exempted for a shoulder dislocation. “After the exemption was decided in 2002, my son did his best to recover and planned to take the physical exam again,” Lee said. “But the next year, a brain tumor was discovered and he had dangerous surgery. He, therefore, gave up.”

Lee’s confirmation hearing was the first political test for Moon. Lee’s appointment as prime minister requires a majority vote in the National Assembly. The legislature currently has 299 members and the ruling DP has 120 lawmakers, making opposition supports crucial. The conservative main opposition LKP has 107 lawmakers and the People’s Party 40. Another hearing will take place today, and the major parties agreed to vote on Lee’s confirmation as early as Monday.

On Wednesday, lawmakers also grilled Lee about his views on foreign and security issues. “There is no doubt that the Korea-U.S. alliance is the most substantial pillar of Korea’s foreign policy,” Lee said.

He said the Moon administration’s basic stance is that the international community’s sanctions on North Korea must be respected. “Unless the North has a change in its attitude, it is our basic position that a dialogue is not possible,” he said.

LKP Rep. Park asked Lee if the North is the South’s “main enemy,” and Lee said he does not agree with the term. “The defense white paper doesn’t use the expression,” he said. “It is a primary enemy from the military perspective, but the prime minister cannot just think about the military aspects alone.”