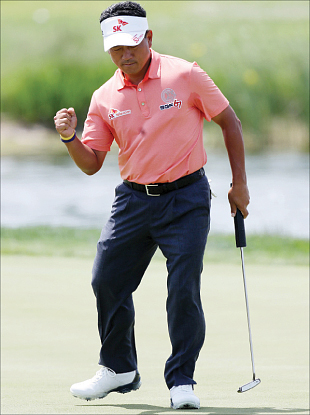 Choi Kyung-joo celebrates after making a birdie during the 2017 SK Telecom Open. [YONHAP]

Choi Kyung-joo returned to Korea after seven months away to compete at the SK Telecom Open last weekend. Although Choi turned 47 on the first round of the tournament, he still performed well against much younger players.

Choi got off to a great start of the event, shooting a bogey-free round of 66 to tie for third. After that, he shot another under-par round of 67 and 71 to move up to second after the third round, giving himself a chance to win the event for the fourth time. In his records at the SK Telecom Open, he won the event three times - in 2003, 2005 and 2008.

However, Choi ended up shooting two over par, 74, to finish at tied for 18th place at Sky 72 Golf Course, Haneul course on Sunday. Though he wasn’t able to win another tournament, Choi managed to set another record, making 29 consecutive cuts on KPGA tour events along with Kim Hyung-sung.

By having Choi at the golf course, the atmosphere changed. Just as players change their attitude when in a tournament with Tiger Woods, once the world’s best golfer, so it was with Choi. 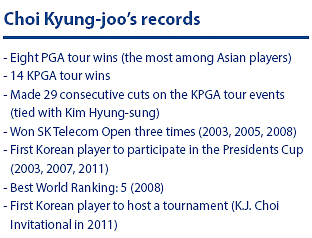 “Getting to play in the same tournament as Choi Kyung-joo is beyond special,” Lee Soo-min said.

And Kim Tae-woo, the 2016 KPGA rookie of the year, said, “it is not an exaggeration to say all the players dreamed of becoming a professional golfer looking up to Choi Kyung-joo.”

Aside from playing his own round, throughout the tournament, Choi continuously encouraged and gave advice to other players.

“Last season, I learned from Choi how to grip the club all over again,” Lee Dong-hwan, who played in the tournament under invitation, said. “With my improved grip, I gained distance, having a better impact point. It was a big help.”

From Choi’s advice, Lee won a Web.com tour event for the first time in six years in 2016. To younger players, Choi is considered a living legend. Still, he trains as hard as younger players.

“I’m not young, but I think I still have the competitiveness to win another tournament on the PGA tour,” Choi said. “Before I retire, I want to win ten tournaments.”

To fully prepare for the event, Choi appointed Wie Chang-soo as his new swing coach in February 2016. Since then, Choi has been working on his swing and is still in the process of improving.

Choi, who is also known as K.J. Choi on the PGA tour, turned pro in 1994, playing mainly on the KPGA tour. He made his PGA tour debut in 2000. In his second year on the PGA tour, he won his very first PGA tour event, the Compaq Classic of New Orleans, becoming the first Korean to do so.

In 2012, Choi won the CJ Invitational in 2012, an Asian Tour event hosted by Choi. But since then, he has not yet won a tournament, and his career record remains at eight wins on the PGA tour and 14 wins on the KPGA tour.