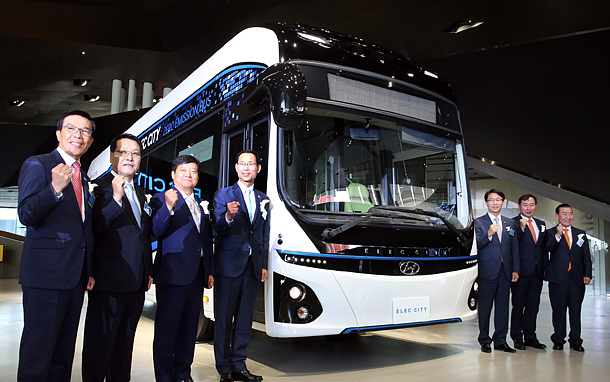 Choi Jeong-ho, vice minister for transport at the Ministry of Land, Infrastructure and Transport, fourth from left, and other guests of honor, flank the “Elec City” on Thursday at Hyundai Truck & Bus Mega Fair in Goyang, Gyeonggi. Elec City is Hyundai Motor’s first all-electric bus to be commercialized, set to hit the road next year. [HYUNDAI MOTOR]

Hyundai started to develop Elec City in 2010. This is the first electric-powered bus they will commercialize. The automaker unveiled predecessors of Elec City’ in 2012 and 2014 but none were actually commercialized.

Equipped with a 256 kilowatt-per-hour lithium polymer battery, Hyundai’s all-electric bus can travel 290 kilometers (180 miles) on a single charge. It takes about 67 minutes to fully charge the battery. The eBus-12, the Korean version of Chinese automaker BYD’s K-9 bus, was introduced in March. It can travel about 250 kilometers on a single charge.

Maximizing the battery efficiency was one of the key technologies that Hyundai focused on in the past decade. The buses are equipped with an automatic temperature control system the car manufacturer developed. The system stops the battery from overcharging, while controlling its temperature depending on weather conditions. The carmaker has said that its exterior design was meant to incorporate a futuristic image.

“Elec City can slash down the fuel cost to one-third of a regular bus,” said Nam Chan-jin, a director at Hyundai Motor in charge of Elec City’s development. “We expect as much as 270 million won ($241,000) can be saved over 10 years.”

The company said in a press release that it will bolster its eco-friendly bus lineup with vehicles such as fuel cell electric buses. Hyundai will test its first fuel-cell electric bus later this year.

It also aims to increase the fuel efficiency of commercial vehicles by 30 percent across models by 2020. One of the key items on its agenda to realize this is to apply hybrid and plug-in hybrid technologies into its commercial automobiles.

Hyundai and other companies showed off concept cars such as hydrogen-run Solati, along with some 100 commercial vehicles and buses, at the fair. Solati is Hyundai Motor’s mini bus, which currently runs on diesel.