At Cannes, praise for the old Korean boys : Bong’s ‘Okja’ stirs the pot, while Hong screens his 21st feature

At Cannes, praise for the old Korean boys : Bong’s ‘Okja’ stirs the pot, while Hong screens his 21st feature

The Cannes Film Festival has faced criticism in the past for screening work from the same “usual suspect” directors, and if the same can be said about Korean filmmakers’ participation in the prestigious competition, the title of festival darling might go to Bong Joon-ho and Hong Sang-soo.

The two auteurs are no stranger to Cannes, where the international cineaste community has consistently embraced them for their unconventional narratives and aesthetic, and this year was no exception.

Bong’s action-adventure film “Okja” about a young girl (An Seo-hyun) who risks her life to save her best friend, a genetically modified pig, from being kidnapped by a multinational conglomerate was critically appraised, despite backlash from the old guard of the film world - cinema chains - who complained about “Okja” skipping a traditional theatrical release and going straight to Netflix instead.

“How can this movie’s producer - Netflix - ever be content with just letting it go on the small screen?,” wrote The Guardian’s Peter Bradshaw, who gave the film five out of five stars. “Apart from everything else, the digital effects are spectacular and the visual images beautiful.”

There are whispers that the fracas over distribution method may hurt Bong’s chance of winning the top Palme d’Or prize. Pedro Almodovar, the competition jury’s president, lashed out at Netflix, saying the screen for films “should not be smaller than the chair on which you’re sitting.”

Hong, on the other hand, has faced less controversy at Cannes, though the Korean paparazzi haven’t exactly been kind about his extramarital affair with longtime muse Kim Min-hee. 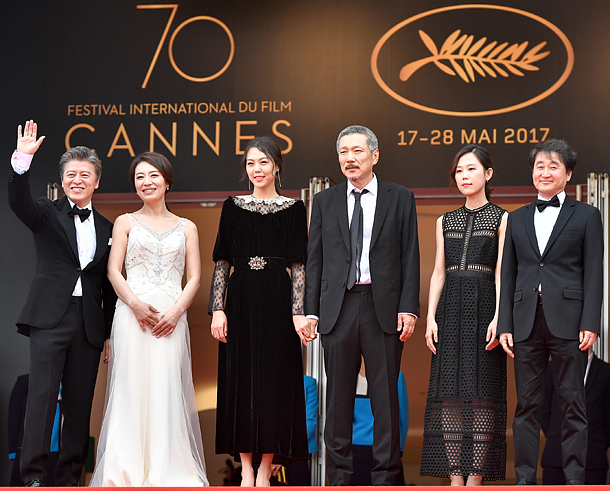 Director Hong Sang-soo, third from right, and actors on the red carpet for the screening of the film “The Day After” in competition at the Cannes Film Festival on Monday. [XINHUA/YONHAP]

Hong’s latest film, “The Day After,” about a famous writer who enters an affair with his assistant (sound familiar?), was well received, especially by the French press. Hubert Niogret, editor of the French film magazine Positive, called it “fantastic” and “the best of the titles that have so far been unveiled in this year’s Cannes competition” after its world premiere in France on Monday.

Todas Las Criticas, a Spanish film website that aggregates ratings from over 40 critics, gave “The Day After” 7.59 out of 10, the highest score among the 15 competing movies that have been evaluated as of Thursday. “Okja” earned 6.2, and a total of 19 movies are competing for the Palme d’Or.

Both “Okja” and “The Day After” received a four-minute standing ovation, which is said to be a good criterion for measuring the possibility of a film winning the top honor. Four minutes, though, still falls far short of the 10-minute applause given to Park Chan-wook’s “Oldboy,” which won the Grand Prix at Cannes in 2004.

“The Day After” is a black-and-white affair about Bong-wan (Kwon Hae-hyo), a famous author and publisher who cheats on his wife (Cho Yoon-hee) with his assistant (Kim Sae-byeok). Bong-wan’s wife eventually figures it out, but it is only after he breaks up with his mistress that the wife comes around the office to mistakenly slap the wrong woman: Ah-reum (Kim Min-hee), a newly-hired assistant.

The film is considered one of Hong’s most audience-friendly movies with the inclusion of delightful humor. It is his 21st feature and the fourth to enter the main Cannes competition after “In Another Country” (2012), “Tale of Cinema” (2005) and “Woman is the Future of Man” (2004).

The prolific writer-director has another film screening out of competition, “Claire’s Camera,” co-starring Kim Min-hee and French arthouse queen Isabelle Huppert. Huppert plays a mysterious music teacher/poet with an uncanny knack for photography who helps another woman (Kim) who has just been fired by her female boss for allegedly not being honest.

The reaction to this 68-minute piece was lukewarm. Screen International, one of the few media outlets that reviewed “Claire’s Camera,” described it as “dashed and somewhat shallow.”

“Hong Sangsoo is certainly one of Korea’s most prolific directors,” the review said. “Quantity, however, is not necessarily a mark of quality, even for a filmmaker like Hong.”

“The Villainess” and “The Merciless,” the two Korean films invited to the Midnight Screening section, generally received positive reviews.

Helmed by Jeong Byeong-gil and starring Kim Ok-bin and Shin Ha-kyun, “The Villainess” is an action-packed film revolving around a deadly female assassin (Kim) who gets a second lease on life after the South Korean intelligence agency recruits her to be a sleeper cell. Critics lauded Kim’s performance despite the weak plot.

Crime thriller “The Merciless,” starring Seol Kyung-gu and Yim Si-wan, similarly received rave reviews after its screening on Wednesday night. The film about the relationship between an undercover cop and drug smuggler received a seven-minute standing ovation.

The 70th edition of the Cannes Film Festival will wrap up on Sunday.