Putin tells Moon’s envoy he will mediate with Pyongyang

Putin tells Moon’s envoy he will mediate with Pyongyang 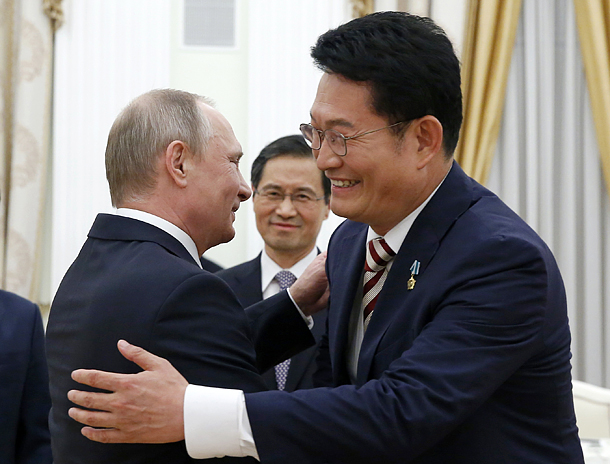 Russian President Vladimir Putin said that he is willing to play a mediating role between the two Koreas by dispatching an emissary to Pyongyang to help relieve the state of crisis on the Korean Peninsula, according to President Moon Jae-in’s special envoy to Moscow.

Song, a fourth-term lawmaker, said when he asked Putin whether he would consider sending a special envoy to Pyongyang to meet with North Korean leader Kim Jong-un to discern his intentions, the Russian leader replied, “I am willing.”

Putin also said, “The North Korean nuclear issue could never be resolved through war — that’s impossible,” according to Song.

The Russian leader said that trying to resolve the issue solely through imposing sanctions on Pyongyang has “limitations,” adding this could bring about humanitarian issues and not be in the interest of the North Korean people. Song said Putin urged that the problem be “solved through dialogue.”

Putin further said that in order to create an atmosphere in which dialogue would be possible between Trump and Kim Jong-un, he would call up the U.S. President and thoroughly explain the situation on the Korean Peninsula to him.

During their meeting, Song delivered a letter from President Moon to the Russian leader and discussed other bilateral issues and the possibility of trilateral economic cooperation between Seoul, Pyongyang and Moscow — an issue they said should be discussed in further detail at Putin and Moon’s first summit.

Putin also pushed for a free trade agreement between South Korea and the Eurasian Economic Union, the Russia-led regional bloc that includes Belarus, Kazakhstan, Armenia and Kyrgyzstan. They agreed on Moon’s suggestion for a bilateral project to jointly develop Arctic shipping routes.

During the talks, Putin adhered to Russia’s opposition to the deployment of the U.S.-led Terminal High Altitude Area Defense (Thaad) system, in South Korea, questioning its effectiveness and underscoring that the North Korean nuclear issue cannot be resolved through military measures.

Song was presented Russia’s Order of Friendship by Putin in February 2010, marking the anniversary of the Battle of Chemulpo Bay, which is now Incheon, in which the legendary Russian cruiser Varyag took part on Feb. 9, 1904, during the Russo-Japanese War (1904–1905).

Former Incheon Mayor Song worked for the transfer of the cruiser Varyag’s naval ensign, a Russian military relic, to Moscow. Putin said that Russia remembers Song’s role in that handover.

Putin also told Song he looks forward to meeting Moon on the sidelines of the upcoming Group of 20, or G-20, summit to be held in Hamburg, Germany on July 7 and 8.

The Russian leader also extended an invitation to Moon to attend the Eastern Economic Forum held in Vladivostok on Sept. 6 and 7.

Moon, in a shift from the hard-line stance of his two predecessors, has been in favor of engagement of the North along with sanctions, and his first summit with Putin would be an opportunity to discuss their denuclearization approaches and trilateral economic cooperation.

Chinese President Xi Jinping is scheduled to visit Russia in July and hold a summit with Putin, where North Korean denuclearization is expected to come up.

China has been echoing a similar message to Russia, emphasizing dialogue as the means to resolve the situation on the Korean Peninsula.

The United Nations Security Council has been working on tougher sanctions on North Korea.