Bitcoin is worth more than gold - for now

Bitcoin is worth more than gold - for now 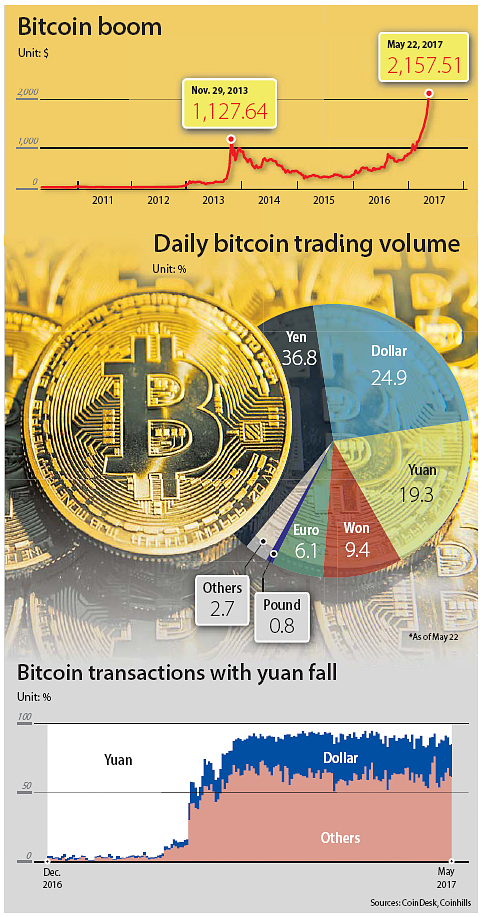 Bitcoin prices surpassed $2,000 last week. According to CoinDesk’s Bitcoin price Index, May 20 was the first time the price surpassed $2,000 in its history. As of Monday, the coin traded at $2,157. With Bithumb, Korea’s biggest digital currency trader, the currency reached 2.98 million won ($2,664) on the same day.

The price of bitcoin was below $1,000 earlier this month but doubled within a couple of months.

The price of 1 bitcoin is now more expensive than an ounce of gold. Gold is trading at nearly $1,250 per ounce in the United States. The price of gold hit an all-time high on Sept. 6, 2011, when it was $1,920 per ounce, which is still lower than the current price of bitcoin.

Bitcoin was introduced in 2009 by anonymous engineers and is traded peer to peer. The concept began to spread as many people lost trust in traditional currency systems. There are just 21 million bitcoin available until 2040. Since there is a limited supply, bitcoin is both a currency and investment tool.

The price volatility is problematic. As digital currency gains popularity, there are many negative effects. Everyone can participate in trade and their identities are anonymous. If someone knows the address of people’s wallets, he or she can transfer money right away.

The malware strain called WannaCry, which hit the world recently, demanded ransoms in Bitcoin. The Wall Street Journal also pointed out that rising number of digital currencies is also increasing cybercrimes. Many use bitcoin’s anonymity for criminal purposes.

In Korea, some 20 people were arrested for trading drugs using bitcoin last month. Korean police also seized 216 bitcoins after arresting an operator of a pornographic website with about 1.21 members last week.

“We had a person who bought 10 million won worth of bitcoin and transferred it to a voice phisher,” said Cha Myung-hoon, head of Coinone, one of the three largest digital currency traders in the country. “We found out that bitcoin was delivered and exchanged to cash in China.”

Kim Yong-tae, a director at the Financial Supervisory Service, added that it is hard to find out where the traded bitcoin ended up until it’s exchanged into cash. Furthermore, if criminals use digital currency operators overseas, it is very hard to track down since systematically working or cooperating with foreign investigators is tough. Local financial regulators were able to block money criminals tried to transfer to bank accounts in foreign countries. But it is hard to follow the same route for digital currency like bitcoin.

Some analysts also worry the digital currency is being used for tax-evasion. Technically speaking, digital currency counts as an asset but there is no law to have government collect taxes on it. For example, the government can’t levy taxes even though parents give bitcoin to their children. The coin is traded 24 hours a day and the value fluctuates by 50 percent within a couple of hours, one of the few reasons that is it’s tough to set clear rules to levy taxes on it.

“This is the time to reduce the negative impact coming from digital currency as much as possible by learning from foreign examples, while having it help develop the fintech industry,” said Kim Yeon-joon, a director at Financial Services Commission.