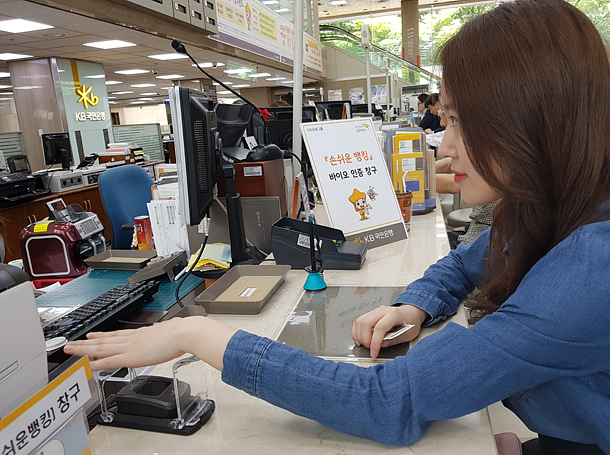 Despite a series of reported compromises involving technologies such as iris scanning and voice recognition, Korea’s financial circle is pushing ahead with emerging biometric authentication methods.

From fingerprints and voice recognition to iris scanning, major banks have expanded their use of biometrics, believing that the new service can deliver a better user experience and higher security.

So far, the biometric methods were primarily used in personal mobile banking via select smartphone models, but KB Kookmin Bank, the country’s largest by net profit and number of users, is bringing palm-vein recognition to its brick-and-mortar branches and ATMs.

Clients don’t need to carry ID cards or use passwords; all they need is to place their hands above the scanner. 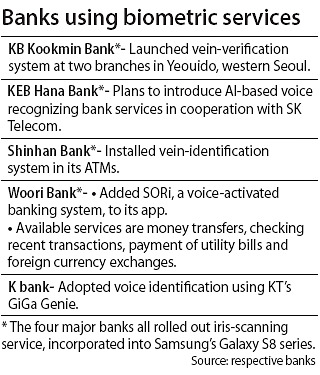 The team spearheaded the adoption of vein-scanning technology and helped the bank launch the system at two branches in Yeouido, western Seoul.

KB Kookmin said it will install the systems in 50 branches by the end of this month.

Kim explained that the palm scan would not face the same kind of vulnerabilities as iris recognition on Samsung’s Galaxy S8.

“The sensor of the palm-vein device can only recognize the pattern when hemoglobin is actively flowing within the individual’s veins, which means that copies can’t unlock the system,” Kim continued, “This is why we chose palm scanning.”

To start the biometric service, one must sign a consent form that asks for the use of biometric information, but the agreement is only needed once. A registration process follows, where users are asked to place a hand on a scanning device four times.

The repetition allows the device to capture vein patterns through near-infrared lights fitted with a special camera. The image is then converted into an encrypted biometric key and stored as a template.

After the registration, users are required to place their hands on the scanner only once to use banking services.

KB Kookmin also installed the technology into one of its ATMs at the two Yeouido centers.

But biometric methods also come with their own share of risks.

Although the vein-pattern authentication is widely considered to be superior to fingerprint-based or facial recognition, its security and accuracy is lower than iris scanning. Also, the country’s central bank warned that biometric systems are susceptible to identity theft.

“In the case of password-based verification, one can rearrange the numbers when security breaches happen,” a report released by the Bank of Korea said. “But biometric information is hard to recreate or edit.”

Despite these concerns, rivals at home and abroad are competing to embrace different biometric technologies.

Others are fostering partnerships to reduce costs and draw upon the expertise of tech companies.

KEB Hana Bank plans to introduce AI-based voice recognition bank services in cooperation with SK Telecom, the country’s top mobile carrier. The voice-activated system will be made available via the carrier’s NUGU, an Amazon’s Eco-like speaker backed by artificial intelligence.

Multinational banks such as HSBC and Barclays have deployed voice biometrics, while Lloyds Banking Group is preparing to use Microsoft Hello to access online bank accounts.

The size of the biometric market is predicted to grow tenfold in the next five years, according to U.S. market research firm AMI, which forecasted that the market will grow from being worth $2.6 billion to $33.3 billion by 2020.