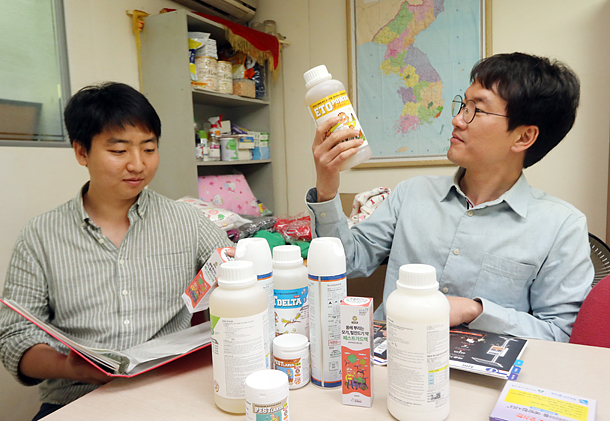 Members of the Korean Sharing Movement examine samples of insecticides and other products that could be used for Malaria prevention at the border areas with North Korea while at the office of the nongovernmental organization in Mapo District, western Seoul, on Friday, after the Ministry of Unification approved the organization’s contact with counterparts in the North to coordinate its Malaria prevention program. [YONHAP]

The Ministry of Unification approved private person-to-person contact with North Koreans by approving the nongovernmental organization Korean Sharing Movement’s humanitarian program on Friday, the first such contact approved in the Moon Jae-in administration and the first since the fourth nuclear test by the North last year.

“The government will respond firmly to provocations from the North but will also maintain a flexible stance in reviewing possible humanitarian support and exchanges at the private-level, within the boundaries set up by the international sanctions on North Korea,” said Lee Yoo-jin, deputy spokesperson of the Unification Ministry. “The ministry has approved Korean Sharing Movement’s Malaria prevention program at the border areas.”

The ministry’s approval is the first one to allow a person-to-person contact between the South and the North since the fourth nuclear test on Jan. 6, 2016. The Kaesong Industrial Complex was shut down in February last year after the North followed up its nuclear test with a long-range ballistic missile launch.

Some 10 private organizations have requested and are awaiting the ministry’s approval for their humanitarian programs into the North.

“The preventive measures against Malaria need to be executed from the end of May for them to be effective,” said Kang Young-sik, secretary-general of the Korean Sharing Movement. “We will try to contact the North via fax messages and try our best to deliver the goods as soon as possible.”

The Unification Ministry will have to dole out additional approval for the delivery of goods to the North, which in the case of the Malaria prevention includes insecticide and basic medical kits.

“The preventive measures on the border areas is needed for the people of both the South and the North,” said a ministry official. “There will likely be a positive review for goods to be delivered onto the North for the program.”

The Ministry of Unification in its report to the Moon administration’s advisory committee for state affairs planning on Friday mentioned possible policies to improve the bilateral relations between the North and the South.

“[The committee and the ministry] agreed that the ministry needs to play a more engaged role in leading a new type of bilateral relations for peace on the Korean peninsula,” said the Democratic Party Rep. Park Kwang-on, spokesman of the advisory committee for state affairs planning. “We will be systematically reviewing the policies of the new administration together.”

“We discussed the role of the Unification Ministry in promoting peace on the Korean Peninsula,” said a member of the committee. “We are developing North Korea policies that do not go easy on military provocations but still find ways to improve bilateral relations.”

The ministry is also looking to establish a type of bilateral Bill of Rights with the North, which was one of the campaign pledges of President Moon to organize the existing agreements between the North and the South, including the 1972 July 4 South-North Joint Communique and the 1991 inter-Korean Basic Agreement, to create a renewed and re-established agreement.