Vietnamese turn out in huge numbers for team

Vietnamese turn out in huge numbers for team 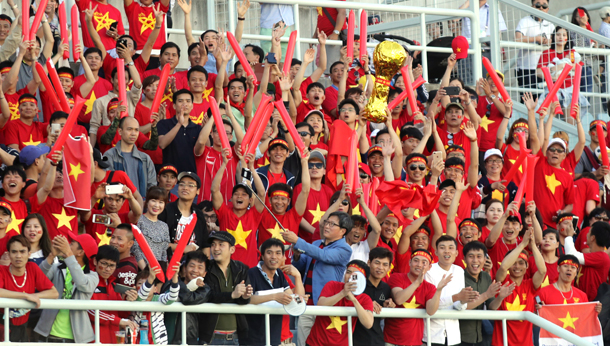 Vietnamese clad in red T-shirts, each with a yellow star, signifying the national flag, are cheering their team at the FIFA U-20 World Cup game between Vietnam and France on Thursday at the Cheonan Stadium in South Chungcheong. [YONHAP]

Although the FIFA U-20 World Cup game between France and Vietnam in Cheonan, South Chungcheong, on Thursday was clearly not a home game for either of them, most of the audience was clad in red and waving the flag of Vietnam.

The Vietnamese fans started filing in some two hours before the game started at 5 p.m., and by the time it did, more than 3,000 out of 4,672 seated at the Cheonan Stadium were Vietnamese.

Though Vietnam lost to France 0-4, the thousands of Vietnamese gathered at the stadium cheered for their team until they left the grounds, chanting together, “Vietnam vo dich!” or “Invincible Vietnam!”

Thursday was the second day in a week when thousands of Vietnamese gathered at the stadium to cheer for their national team. Some 3,000 had gathered on Monday for the game between New Zealand and Vietnam.

“There was a big Vietnamese crowd there and that really helped them. It was almost like a home game for them,” Darren Bazeley, head coach of the New Zealand team, told the New Zealand Football.

“They drew a lot of energy and tempo from that. They started on the front foot and we are off the pace. It took us awhile to get into the game. In the second half we went out and I thought we grew into the game and we created some more chances.”

The game ended with a 0-0 draw, each team winning one point in Group E.

Many of the thousands of Vietnamese gathered at the games on Monday and Thursday were students and workers in Cheonan, Asan and in Gyeonggi’s Pyeongtaek and Hwaseong.

The Cheonan city government had sent out notices to some 900 companies in Cheonan and 700 more in nearby regions to tweak the working hours of Vietnamese employees to allow many to attend the game.

“My boss let me take the day off to watch the game,” said Huyen, a 25-year-old from Vietnam who works for a facility manufacturer in Cheonan. “Everyone I know in Vietnam is passionate for the U-20 games. My friends back home are envious that I am attending the games here.”

Among the 2 million or so foreign residents in Korea, about 150,000 are Vietnamese.

“It’s a big deal that Vietnam has entered the FIFA U-20 World Cup,” said Tien Linh Nguyen, a 35-year-old from Vietnam. “I am sharing the atmosphere here with my friends back home by posting what’s happening here on social media.”

Vietnam was one of the five teams of the Asian Football Confederation that qualified for the U-20 World Cup. This is the first time that the country is playing at a FIFA game.

“This is beyond my imagination, giving players more fighting spirit,” said Vietnam’s coach Hoang Anh Tuan to VnExpress. “I look forward to coming matches, [where] fans will continue to spread the passion for Vietnam.”

France entered the round of 16 after the win on Thursday. Vietnam is playing another game with Honduras on Sunday at the Jeonju World Cup Stadium in North Jeolla.