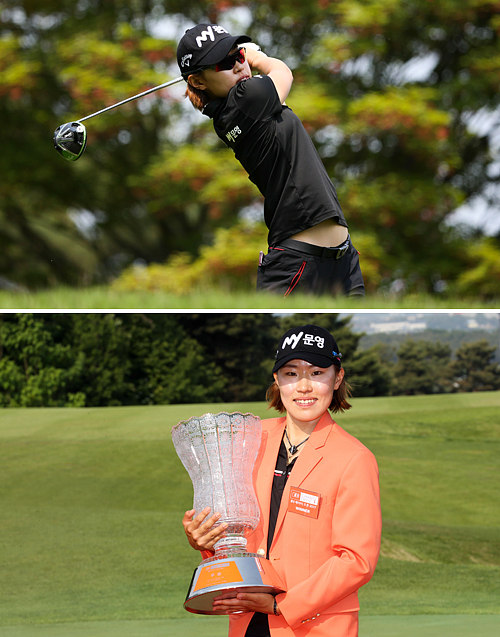 Top, Lee Ji-hyun hits watches her tee shot during the final round of E1 Charity Open at South Springs in Icheon, Gyeonggi-do, on Sunday. Bottom, Lee shows off her trophy after winning the event at nine under-par. [KLPGA]

She had a solid start in the tournament, shooting a bogey-free round of 65 on the first day to take the lead. However, on the second round, Lee stayed back with an even par round, giving the lead away to Cho Jeong-min, who had a two shot lead heading into the final round. Lee made a birdie on the second hole, par-four, but that evened out with a bogey on the fourth hole, par-four. However, shortly after her bogey on the fourth, Lee made another birdie on the sixth hole to shoot one under-par in the front nine.

Then in the back nine, Lee carded three more birdies with one bogey to finish her round at two under-par, 70. It all came down to the final hole as both Cho and Lee were tied for the lead at nine under-par. Lee was declared a champion after Cho three-putted to finish her round with a bogey.

Although 2017 is Lee’s third season on the KLPGA tour, it’s her first time winning a tournament. She has been an unknown player on the tour until two weeks ago at the 2017 NH Investment & Securities Ladies Championship, finishing second.

Lee did not receive any attention in her first two seasons but she had been slowly improving based on KLPGA tour money ranking in two previous seasons, where she finished 90th in 2015 and 41st in 2016. So far in the 2017 season, Lee is ranked sixth in money rankings.

Until last year, Lee had trouble with finding consistency in her tee shot and from this; she went through a swing change. With that, Lee’s accuracy in her tee shot improved, from 75.25 fairways in regulation percentage in 2016 to 82.31 percent so far in the 2017 season. Not only that, with improved accuracy in her tee shot, she is now considered one of the long hitters on the tour, improving almost 20 yards in her drive from last year to average 262.33 yards.

Choi Hey-jin, the only amateur in the field, shot a bogey-free round of 66 to finish runner-up at eight under-par. Meanwhile, Cho, sole leader until the 11th hole, par-five, finished tied for second as she shot two-over par only in the back nine.

Just like the LPGA tour, there hasn’t been a multiple winner and even more surprising, four players have won the event for the first time in their career this season.

Up next, the Lotte Cantata Ladies Open will run Friday through Sunday at Sky Hill Jeju Country Club. It’ll be the first tournament Jang Ha-na will play in since announcing her return to the KLPGA tour last week.