Bae Jeong-nam’s journey from the runway to screen : Once derided for his short stature, the model hasn’t let height stop him

Bae Jeong-nam’s journey from the runway to screen : Once derided for his short stature, the model hasn’t let height stop him 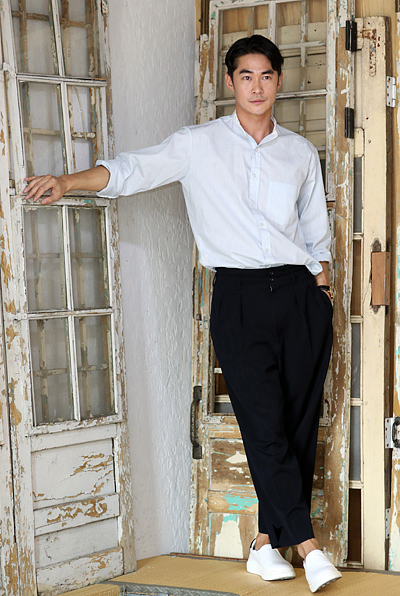 In the world of modeling, height makes might. So for Bae Jeong-nam, who stands at 177 centimeters (5 feet 10), work has never come easy. When he was first starting off as a model 15 years ago, he was rejected from countless fashion shows and events because his height never fit the bill.

But Bae didn’t let this stop him, and he instead focused on perfecting his other strengths. He practiced walking more and focused on improving his fitness so that show organizers would give his profile a second look - and it worked. The offers started rolling in, and now, after more than a decade as a successful model, Bae is ready to transition into the entertainment industry as an actor.

Most recently, he had a featuring role in the crime comedy “The Sheriff in Town,” which was released earlier this month. It wasn’t his first on-screen role per se, but it was one of the first in which he had heavy promotion.

In the film, Bae plays a comical character in a group of amateur football players, and when he and the cast were making the talk show rounds to plug the film, there was much attention given to his modeling career.

During a recent interview with Ilgan Sports, an affiliate of the Korea JoongAng Daily, Bae spoke at length about his heyday as a model and how he’s trying to put the past behind him to focus on the future. Below are edited excerpts from the interview.

Q. What has changed since you went on talk shows to promote the movie?

A. I now have female fans. Out of all my fans, usually around 80 percent of them were men, and most of the comments I got [online] were from men saying, “You are cool, hyeong.” [Hyeong is an affectionate term used by Korean men to refer to older men with whom they are close.] But now I see more “You are cool, oppa.” [Oppa is affectionately used by women to refer to older men.] Many people started to look at me and smile. I feel accomplished because I have become someone who shares joy with others.

Do you wish you had more screen time in the final cut?

No! I’m so happy. Compared to all the roles I have played, this is a relatively big one. The director did tell me that all the scenes I filmed might not make it to the final cut, so I didn’t have many expectations, but not as much was edited out as I thought. I think the director was worried about me raising expectations and I actually felt much better after I saw the movie.

How did you first debut in fashion?

I got a casting offer when I was working at a clothing store in Busan. I originally said no because I thought it wasn’t my job. But my close friends told me to try it, so I went to Seoul.

And the agency you joined was the one with actor Kang Dong-won?

Yes, everyone in the agency was tall except for me. Six of us were taking profile pictures, and I was the one who didn’t match the height. That was 15 years ago, and being tall was undoubtedly important in becoming a model. Even without any charm, being tall was what you needed to have.

Then I was booked on one show and was told to just walk on stage as I wanted to. That show gave me a spotlight. I then got another chance at a bigger role with walking on a runway. I practiced a lot and made my body perfect, and everybody was wowed. Since then, things just worked out.

Did you try to incorporate your image as a model into your acting?

I wanted to show a different side of me when I was acting. The image of a model can be very limiting. I wanted to look ugly and break any preconceptions that people might have of me. I wanted to show off an unrefined, rustic feeling rather than look like someone handsome.