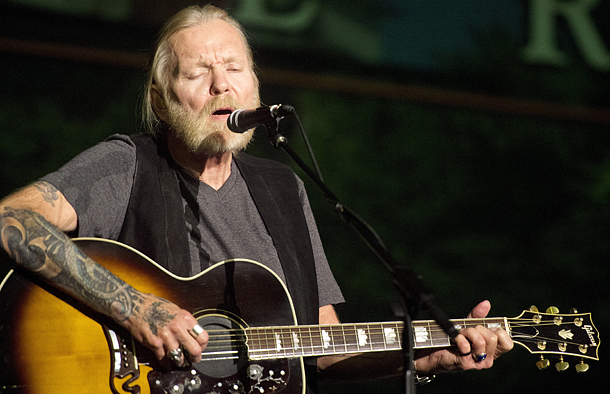 Rock and Roll Hall of Famer Gregg Allman performs during Mercer University’s Commencement at Hawkins Arena in Macon, Georgia, in May 2016. The musician died on Saturday, his manager said. He was 69. [AP/YONHAP]

SAVANNAH, Georgia - Gregg Allman, a survivor of tragedy, knew the blues musically and in a painfully personal way.

Raised by a single mother after his father was shot to death, he idolized his guitar-slinging older brother Duane and became his musical partner. They formed the nucleus of The Allman Brothers Band, which helped define the Southern rock sound of the 1970s.

Their songs such as “Whipping Post,” “Ramblin’ Man” and “Midnight Rider” laid the foundation for the genre and opened the doors for groups like Lynyrd Skynyrd and the Marshall Tucker Band.

Gregg Allman, whose bluesy vocals and soulful touch on the Hammond B-3 organ helped propel the Allman Brothers Band to superstardom, died Saturday. He was 69.

Allman died peacefully and surrounded by loved ones at his home near Savannah, Georgia, his manager, Michael Lehman, told The Associated Press. He blamed cancer for Allman’s death.

“It’s a result of his reoccurrence of liver cancer that had come back five years ago,” Lehman said in an interview. “He kept it very private because he wanted to continue to play music until he couldn’t.”

Born in Nashville, Tennessee, the rock star known for his long blond hair was raised in Florida. In his 2012 memoir, “My Cross to Bear,” Allman described how his older brother was a central figure in his life in the years after their father was murdered by a man he met in a bar. The two boys endured a spell in a military school before being swept up in rock music in their teens. Although Gregg was the first to pick up a guitar, it was Duane who excelled at it. So Gregg later switched to the organ.

They formed The Allman Brothers Band in 1969. It featured extended jams, tight guitar harmonies by Duane Allman and Dickey Betts, rhythms from a pair of drummers and the smoky blues inflected voice of Gregg Allman. They reached the pinnacle of the burgeoning music scene, partying to excess while defining a sound that still excites millions.

Their self-titled debut album came out in 1969, but it was their seminal live album “At Fillmore East” in 1971 that catapulted the band to stardom. Considered one of the greatest live albums ever made, the two LP record opened with their version of Blind Willie McTell’s “Statesboro Blues,” with Duane Allman on slide guitar. The album introduced fans to their fusion of blues, rock and jazz.

Duane Allman had quickly ascended to the pantheon of guitar heroes. But he was killed in a motorcycle accident in October 1971, just months after recording the Fillmore shows. Keyboard player Chuck Leavell joined the band following Duane Allman’s death and the band continued to soar. Their follow-up to the Fillmore album, “Eat a Peach,” became their first top 10 album and featured some of their most popular recordings, including “Melissa” and “Blue Sky.”

In a 2012 interview with The Associated Press, Gregg Allman said Duane remained on his mind every day. “I can tell when he’s there, man,” Allman said. “I’m not going to get all cosmic on you. But listen, he’s there.”

In 1975, singer Cher and Allman married three days after she divorced her husband and singing partner, Sonny Bono. Their marriage was tumultuous from the start; Cher requested a divorce just nine days after their Las Vegas wedding, although she dismissed the suit a month later. Together they released a widely panned duets album under the name “Allman and Woman.” They had one child together, Elijah Blue, and Cher filed for legal separation in 1977. Allman said in an interview with Viva magazine in 1977 that he regretted marrying Cher and said that they probably could have fallen in love if it hadn’t been for his drug abuse.

The Allman Brothers Band likewise split up in the 1980s and then re-formed several times over the years.

Starting in 1990, more than 20 years after its founding, the reunited band began releasing new music and found a new audience. In 1995 the band was inducted into the Rock and Roll Hall of Fame and they won a Grammy Award for best rock instrumental performance for “Jessica” the following year.