Legend of Silla human sacrifices proven to be true : Experts say they were killed to make sure building would be firm

Legend of Silla human sacrifices proven to be true : Experts say they were killed to make sure building would be firm 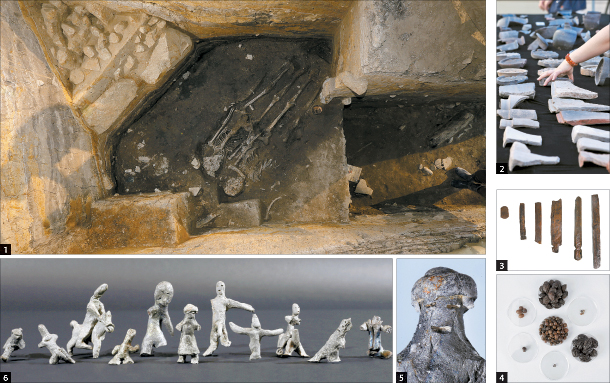 1. Remains of two people from 1,500 years ago found in Gyeongju, North Gyeongsang, at the site of a palace complex known as Wolseong. 2. Roof tiles found at the site. 3. Mokgan, or wooden sticks, used to document data were also uncovered. 4. Various types of seeds found at the site. 5. One of the clay dolls was wearing a turban, which scholars say must be from Sogdia, an ancient Iranian civilization. 6. Clay dolls unearthed at Wolseong. [GYEONGJU NATIONAL INSTITUTE OF CULTURAL HERITAGE, YONHAP]

Could it be that a famous - and horrific - tale in Korea regarding the so-called Emille Bell could be true after all?

According to the tale, to make the bell in the eighth century, the people of Korea’s Silla Dynasty (57 B.C.-A.D. 935) sacrificed a baby.

Upon royal orders, artisans were in the process of making a large bell that would have an unparalleled, beautiful sound, but they continued to fail.

They decided to sacrifice a boy while casting the bell by throwing him into the molten metal, and the bell that resulted makes a mysteriously beautiful sound. Some say it sounds as if it is saying “Emille,” an ancient Silla word for “mom,” leading the Silla people to believe it’s the baby calling for the mother.

This bell’s official name is Sacred Bell of Great King Seongdeok. Known to be completed in 771, it’s a huge bell weighing about 25 tons and is Korea National Treasure No. 29.

For years, there’s been a debate in Korea’s academic world whether this human sacrifice really took place.

While scientific findings conflicted with each other, further complicating the mystery, no archaeological discovery was made proving that for Silla people human sacrifice was a common practice.

Still, people kept wondering. One reason is the mystically profound sound the bell makes. The resonance goes on for as long as three minutes. Contemporary Koreans attempted to copy the bell and its sound but were never able to make a bell with such a sound.

So did the Silla people really kill to make amazing bells?

Korean archaeologists recently found a pair of human remains in Wolseong, a palace complex of the Silla Dynasty located in Gyeongju, North Gyeongsang.

The fifth-century couple - one male and one whose gender has yet to be confirmed - were likely a human sacrifice that reflected people’s wish that the construction of the palace fortress would go well and that the fortress would stand firm for a long time.

They were adults. The male was 166 centimeters (5 foot 4 inches) tall while the other was 159 centimeters tall.

The bark of the tree was dated as being from the 5th century, according to carbon dating. At their feet, four pieces of pottery were found, whose characteristics put their date at some time between the 4th and 5th centuries. Given that the fortress, nine meters above them, was constructed in the 5th century, archaeologists believe these two were sacrificed at least 1,500 years ago.

“It was in March [that we found the remains],” Lee Jong-hoon, the director of Gyeongju National Research Institute of Cultural Heritage, told reporters during a press event held earlier this month at the site. “We were all quite surprised to find human remains. … The Silla custom of human sacrifice, which was passed down only in legends, has been proven by archaeological means for the first time.”

There are also no signs of struggle, leading them to believe that they were likely killed before being buried. Scientists are currently in the process of conducting more studies on the remains to find out more, which will take three months or so.

So far, they say they’ve found protein substances in the feet of the remains of one that could suggest he or she was wearing a pair of leather shoes. The process of drying the remains will take significant time, but once the studies are completed we will gain a more detailed look into the lives of the Silla people.

Park Yun-jeong of the Gyeongju National Research Institute of Cultural Heritage - who is leading the exploration - said that the remains are in rather good condition as the area they found them in is damp. When asked whether they expect to find more human remains as they expand their dig into the site, archaeologists said there is a chance.

There is no official historical record of the Silla Dynasty that mentions human sacrifice when building an architectural structure.

However, in 2000, underneath the site of a well in Gyeongju, the remains of a boy was found, upside down, raising the possibility of a human sacrifice. This, coupled with the famous Silla tale regarding the 7th-century Sacred Bell of Great King Seongdeok, some believe human sacrifice may have been commonplace.

The case of the well, historians say, may be slightly different, as it seems the boy was sacrificed as part of a ritual that Silla people may have held as they abandoned and closed the well.

There is a record in the later Joseon period (1392-1910) that relates to the history of Goryeo (918-1392), and from it we know that during Goryeo there was a rumor that the king would take a commoner boy and bury him underneath the foundation stone of a soon-to-be-built palace.

Also in some parts of Korea, like Gimje, North Jeolla, there is a myth that if a person is buried beneath the foundation stone of a newly constructed building it will not collapse.

In neighboring China, people during the Shang Dynasty (1,600-1,046 B.C.) also resorted to the practice of human sacrifice during large-scale building constructions, although humans buried as sacrifices are typically found with their heads removed.

Archaeologists also found a group of 6th-century clay dolls, including one wearing a turban, which is believed to be of Sogdia, an ancient Iranian civilization.

Silla is known to have had active trade with the West and clay dolls resembling people from the Middle East have been found, but the latest find is the oldest.

Other clay dolls found from Wolseong include one riding a horse with a long corn-shaped hat, a man with exaggerated male genitals and a few dancers.

For the same reason, it’s also known as Banwolseong, or Half Moon Castle.

Despite its historical significance, though, the Wolseong area was for some time left largely unexplored. In fact, it is unclear exactly when the Silla palace was built or destroyed. In 1915, a Japanese archaeologist uncovered animal bones and teeth, as well as grains and earthenware, near the fortress. But it is unclear where the relics are at present.