Liberals rally to demand their views are heard

Liberals rally to demand their views are heard 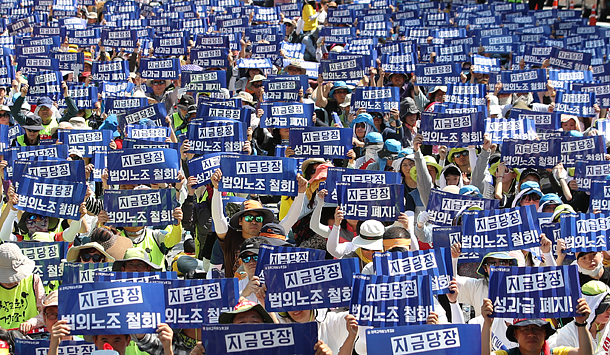 Liberal organizations communicated their demands to the progressive Moon Jae-in government over the weekend with a clear message that they have a fair stake in the new liberal government that ended nine years of conservatives’ grip on power.

Progressive civic and interest groups such as the labor group Korean Confederation of Trade Unions (KCTU) and Korean Teachers and Educational Workers Union (KTU) were part of an active force driving the candlelight vigils that began in October and led to the impeachment of then-president Park Geun-hye. Touting their own contribution to bringing the Moon government into power, the groups have begun commanding to be heard by the first liberal government in a decade.

The KCTU held a demonstration at Cheonggye Square in central Seoul at 5 p.m. on Saturday, which drew abut 5,000 union members. The demonstrators chanted slogans, calling on the government to raise the hourly minimum wage to 10,000 won($8.9) to the current 6,470 won to fix the widening wealth gap. They also called for a complete termination of the temporary employment system in both the public and private sectors.

The KCTU’s demands to terminate all temporary employment system come as President Moon vowed to turn irregular workers to regular positions in the public sector. As part of his agenda, Moon promised all 10,000 irregular workers at Incheon International Airport transition into regular employment status on May 12, just three days into presidency, during his visit to the airport.

“This is our first big rally since the Moon government’s inauguration [on May 10]. We are hereby to declare that we are not just best man of this administration but its owner. We are gathered here today to declare our struggle to make the country move toward in a direction it is ought to go,” said Han Sang-jin, organizational director of the KCTU on a stage.

The teachers’ group KTU also rallied at 1:30 p.m. in Jongno District, calling on President Moon to bring it back the legal status it lost last year after years of legal battle.

“Withdrawing the previous government’s decision to outlaw our group is the foremost education policy priority that the Moon government must take,” said Cho Chang-ick, president of the liberal educational group. It is likely the KTU will have its demands met in the not-so distant future.

Restoring the KYU to legal status was among 10 policy blueprints drawn up by the ruling Democratic Party before Moon’s election. The KTU has been engaged in a legal battle with the government since 2013, when the government stripped the KTU of its legal status after the union refused to comply with a government requirement that it expel members who had been dismissed from their schools.

The group regained its status temporarily in September 2014, when the Seoul High Court issued an injunction to suspend the government’s decision, until it was stripped of its legal right again last year.