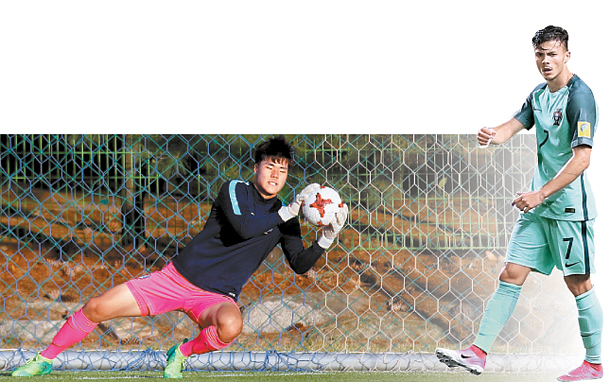 Unlike in group matches, starting today, countries won’t be given second chances - a loss in the round of 16 means elimination.

But the U-20 Korean national football team is going strong with the help of their goalkeeper, Song Bum-keun.

Korea, a country that wasn’t expected to do much other than host, surprised the world by becoming the first team to earn its spot in the World Cup, defeating Guinea and Argentina, whereas some countries surprised fans with their disappointing performances in the group matches. 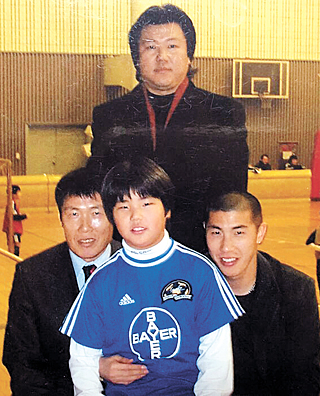 Song Bum-keun, in blue, poses for a photo while in elementary school with Cha Bum-keun, left, Song Tae-ok, his father, in center and Cha Doo-ri, right. [SONG TAE-OK]

Germany and Argentina were the biggest surprises, since they were rated the most favorable teams to win. But despite expectations, Germany barely made it to the round of 16, finishing third in Group F, while Argentina was eliminated from the group matches, losing two matches to Korea and England. This is the second straight time for Argentina to get eliminated from the group matches at the FIFA U-20 World Cup.

Throughout the group matches, it was the Barcelona duo that received the majority of attention in Korea’s success. But Song played by far the biggest role, making 14 super saves over the three matches. Song is now ranked second in that category after Michael Wood of New Zealands.

“Where would I shoot to if I was the striker?” he says he always asks himself.

Song, who started football as a striker in elementary school, understands strikers because when he was little, he insisted on only playing as a striker, but since he is 1.94 meters (6 feet 4 inches) tall, Kim Jong-seok, head coach at Shin Young San Elementary school at the time, persuaded Song and his father to try goalkeeping.

At the time, Song cried, but it may have been the best decision of his career, as he is now Korea’s rising football star.

“For a little over a year, he had no interest in football, but all of the sudden, he started trying really hard as a goalkeeper,” said Song Tae-uk, Song’s father.

In 38 years of the U-20 Korean national football team’s history, Korea has never won a match against Portugal. The U-20 Portuguese football team, led by Emilio Peixe, is considered a strong team in the field, winning the event twice in 1989 and in 1991. In a total of seven games, the team tied three games and lost four.

During its most recent friendly match in January, while the Korean national team was in Portugal for offseason training, they played a 1-1 draw.

There had been changes to the roster for both Korea and Portugal since the friendly, but for Korea, they’ll still have to look out for Diogo Goncalves, Portugal’s main striker.

Goncalves is a rising player, currently playing for S.L. Benfica B, who leads Portugal’s offense from the left side of the field.

“He has great movement and his shots are threatening,” said KBS football commentator Han Jun-hee. “Portugal has produced a lot of qualify wing forwards like Cristiano Ronaldo and Goncalves is rated as their next rising star.”

Since a winner must be determined in the round of 16 to have only one team advance to the next round at the FIFA U-20 World Cup, if the game ends with another draw, it will be determined by a penalty shoot-out.

“Portugal players have great physique but it’s not impossible to win against them,” Song said. “If the match does go to a shoot-out, we are definitely at an advantage.”

The country is hosting the FIFA U-20 World Cup for the first time and the games are being played in six different cities - Cheonan, Daejeon, Incheon, Jeju, Jeonju and Suwon.

The U-20 Korean national football team’s round of 16 match against Portugal will kickoff at the Cheonan Sports Complex in South Chungcheong at 8 p.m. tonight.