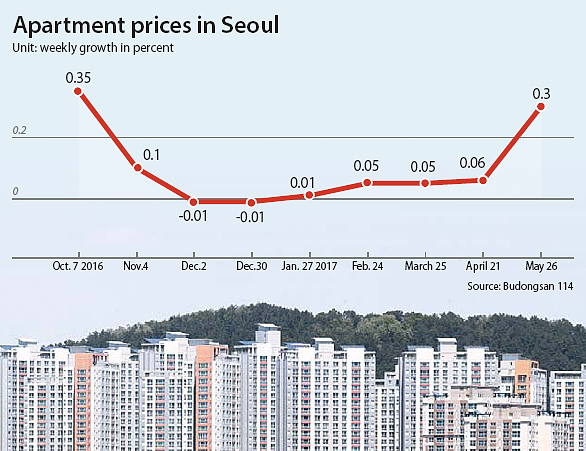 Last month a 42-year-old engineer living in Hwigyeong-dong, Dongdaemun District, central Seoul, signed a contract to buy an apartment in the same neighborhood that he and his family of five have been living in. His current apartment is on jeonse, or long-term deposit.

To his surprise, that value of the apartment rose 10 million won in less than a month since he signed the contract. If he had waited another week, he would have had to pay that additional amount.

According to a local realtor, some similar apartments are selling for 20 million won more.

Real estate in Seoul is heating up, both south of the Han River and north. According to the real estate information provider Budongsan 114, prices of apartments in Seoul rose an average of 0.3 percent last week compared to the previous week. This was the sharpest weekly increase in more than seven months. Last October, the average weekly growth was 0.35 percent.

May is usually considered an off season for the real estate market. In fact the average weekly growth a year ago was between 0.11 percent and 0.13 percent.

Some apartments in Gangdong and Songpa in southeastern Seoul have seen their values rise by as much as 50 million won. Gangdong apartment values increased 1.28 percent last week compared to a week earlier and Songpa’s apartment prices rose 0.68 percent. An apartment in the posh Banpo-dong neighborhood in Gangnam saw its value rise as much as 70 million won.

The market has been relatively quiet recently due to tightened measures by the government since early November to restrain household debt and the political instability caused by President Park Geun-hye’s fall from power.

Weekly growth has been falling since November last year when the government announced the debt measures. In December, prices fell at one point.

But the political instability is over and there are growing expectations of some kind of economic recovery under new President Moon Jae-in.

“As expectations are rising, those who were previously considering selling their apartments have withdrawn their sales, and that has been driving prices up,” said Kim Eun-seon, a researcher at Budongsan 114.

In fact the consumer confidence about the property market has improved for three consecutive months. According to the Korea Research Institute for Human Settlements, April’s confidence index rose 0.4 percentage points from the previous month to 120.5. A reading over 100 indicates a majority are confident in the real estate market. Seoul saw an even sharper improvement of 6.5 percentage points from March’s to reach 132.3.

But household debt is still considered to be one of the biggest risk factors that the Moon administration will have to deal with.

According to the Bank of Korea, household debt including credit card purchases as of March this year reached a new record of 1,359.7 trillion won after increasing 1.3 percent compared to the end of last year. Although the rate at which the debt has been rising has eased, the government is worried about the size.

While the BOK earlier this month froze the key interest rate at a record-low of 1.25 percent, it is under pressure to raise the rate especially since the U.S. has been raising its interest rates.